That's a remarkably difficult question to answer, where the Wall Street Journal indicates the best estimates scientists have of the outdoor population of Felis catus, better known as the domestic house cat, are very far from being either accurate or precise:

"It's a huge window," said Tyler Flockhart, an ecologist with the University of Maryland Center for Environmental Science. "And they're not even estimates. They're expert guesses based on very limited data."

At the end of the day, he said, scientists have to shrug and say this is the best information they have.

It's an important question to answer because Felis catus is a predator species, one whose prey includes birds and small mammals. To the extent that these hunted species overlap the list of endangered or threatened species, knowing the number of outdoor cats would better define the extent to which the populations of endangered animals are negatively impacted by their hunting habits, which in turn, could lead to more effective conservation efforts.

The WSJ article goes on to describe an effort to get an accurate count of the population of outdoor cats in the District of Columbia, which uses motion sensing cameras to conduct a census of the local cat population during a set period of time.

Accounting for the outdoor cats is the most complex part of the research. The project uses cameras to count cats in a given area over a certain period. Then, using a mathematical formula, the project extrapolates the total number of cats in the area by seeing what portion of the photographed cats show up on camera again.

The article provides the following infographic to describe the math developed by U.S. Geological Survey's Andy Royle to more accurate estimate the population of cats in the surveyed region from the sampling of images obtained by the network of motion-sensing cameras: 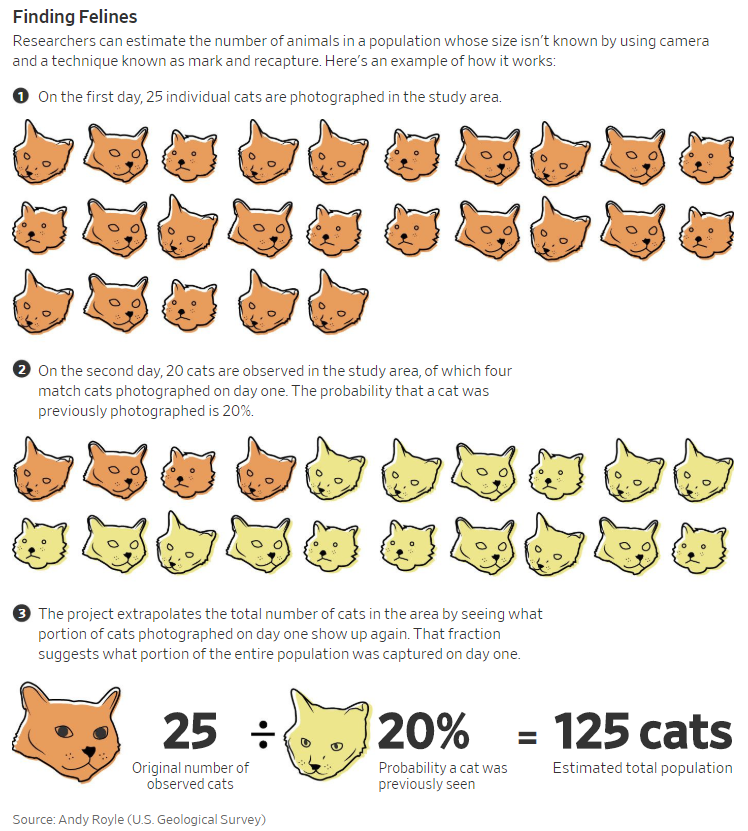 We built the following tool to do that math, so if you want to estimate the size of a population you're interesting in tracking from a sample of it observed over a limited period of time, you can do the same math. If you're accessing this article on a site that republishes our RSS news feed, you can choose to either click through to our site to access a working version of the tool or to view a static screen shot of the tool with its results for the default input data.

The results of running the tool with the default input data confirms the results presented in the WSJ's infographic, but the cool thing about it is that the math can be applied to estimate the size of other difficult-to-measure populations, such as the endangered species that are believed to be negatively impacted by predatory house cats. Or even the total unsheltered members of a region's homeless population, whose numbers are currently counted in the U.S. during a single night in January each year by community canvassers.

Alone, such a canvassing approach is affected by the limitations of the canvassers, who might miss significant portions of the homeless population during the single period where they perform their count, resulting in an undercount in the official figures. Adopting a dual-period measurement approach could provide a better indication of how accurate the canvassers single-period counts are while also leading to a better overall estimate of the total homeless population using this kind of math.