With 28 of 40 regions within the state having reported the preliminary estimates of their 2019 Point-In-Time (PIT) counts of the homeless population within the state, California officials are struggling to grasp that the number of homeless already exceeds the official count of 129,972 for the entire state in 2018, and will almost certainly surpass 150,000 when those counts are finalized in December 2019.

We base this observation on our analysis of the preliminary data that individual "Continuums of Care", which consist of one or more counties in the state of California, have reported through 7 June 2019. With those regions reporting an average 17.1% increase over their 2018 figures, if we apply this percentage to the 12 regions that have yet to report data, we project the number of people who will be counted as homeless in California for 2019 will be 152,332. 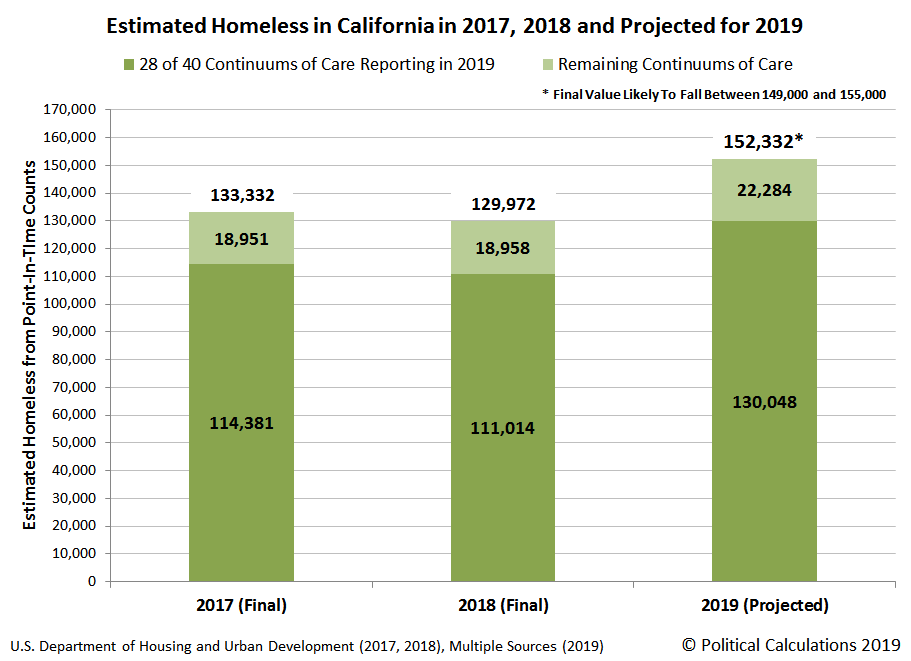 If those remaining 12 regions report no year-over-year change in their homeless counts, the size of California's homeless population will rise above 149,000 at a minimum, which would mark the lower end of a reasonable range for the state's 2019 homeless count. Meanwhile, if our estimate of 152,332 represents a midpoint for such a range, the high end would be more than 155,000.

No wonder elected officials are "stunned" by the staggering homeless counts being reported in across the state, where the below average 12% increase in Los Angeles County and 16% increase within the city of Los Angeles, stands out.

The stunning increase in homelessness announced in Los Angeles this week — up 16% over last year citywide — was an almost incomprehensible conundrum given the nation's booming economy and the hundreds of millions of dollars that city, county and state officials have directed toward the problem....

"It is the height of contradiction that in the midst of great prosperity across the Golden State, we are also seeing unprecedented increases in homelessness," said Los Angeles County Supervisor Mark Ridley-Thomas, a key proponent of the 2017 county sales tax known as Measure H that is raising about $355 million annually for homelessness services over ten years.

"This data is stunning from the perspective that we had hoped that things would be trending differently, but we will not ignore our realities," Ridley-Thomas said after the numbers were released. "No one can ignore the income insecurity, the financial stress that is being experienced throughout the population. ... This is a state that is the wealthiest in the nation, and, at the same time, it is the most impoverished."

Los Angeles claims its "city/county homeless crisis response system helped 21,631 people into permanent housing last year", although that figure bears a similarity to the statistical sleight of hand the Obama administration used whenever it claimed success in "saving or creating" jobs throughout the long years of the Great Recession.

In reality, new housing funded by the $1.2 billion bond enabled by the county's 2016 measure to address homelessness is only just now finishing construction. A $52 million project that received part of its funding from Proposition HHH will be the first to open, which will house 49 permanent residents and 250 others in "temporary bridge housing".

Through January 2019, some $607 million of the $1.2 billion has been committed to building 3,700 housing units. Although voters were promised the money would fund 10,000 units of new housing to support the city's homeless population, officials have warned that they may only be able to afford to build 6,000 with that money, which would put the average cost per unit at $200,000.

For historic data, the U.S. Department of Housing and Urban Development provides an Excel Spreadsheet with data from the annual Point-In-Time Estimates by Continuum Of Care from 2007 through 2018, where this data was last updated on 11 December 2018.