Political Calculations
Unexpectedly Intriguing!
18 June 2019
U.S. Economy Catches Some of Its Breath in Second Half of 2019-Q2

Just after the midpoint of 2019-Q2, we featured a chart showing that the number of dividend cuts that had been announced to date during the quarter was running well ahead of what had been recorded back in 2018-Q2 and was very nearly at levels that would indicate recessionary conditions were affecting parts of the U.S. economy.

It's almost a month later and, as you can see in the following chart showing the cumulative number of dividend cuts we've been able to sample during the quarter through Friday, 14 June 2019, the U.S. economy would appear to be catching some of its breath in the second half of 2019-Q2, where the pace of dividend cuts being announced has slowed considerably. 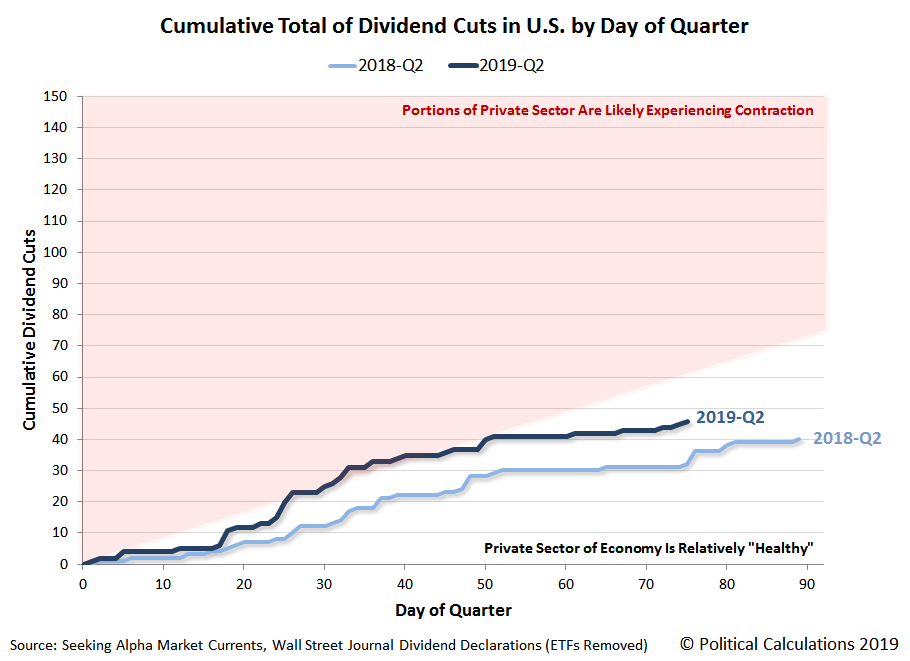 Here are the five firms we've added to our sampling of 2019-Q2's dividend cuts, all of which set their dividends independently of their revenues, earnings, or cash flow, even though three of the firms are Real Estate Investment Trusts (or REITs):

The biggest change from earlier in the quarter has been the absence of oil and gas royalty trusts, where falling oil prices during the fourth quarter of 2018 led to dividends being cut during the first one-and-a-half quarters of 2019. Unfortunately, even though the price of West Texas Intermediate crude oil rebounded after its 2018-Q4 decline during 2019-Q1, those prices peaked and began falling again in late April 2019. Assuming a similar lag, we anticipate we'll see more dividend cuts from this sector of the U.S. economy from its distressed business environment in the upcoming months of 2019-Q3.

The other change we've seen during 2019-Q2 is an increase over 2019-Q1 for the number of financial firms and Real Estate Investment Trusts that have announced dividend cuts, which itself is a lagging outcome of the Federal Reserve's rising interest rates during 2018, whose effective level peaked in 2019-Q1. Since then, U.S. interest rates have begun to fall, dramatically in the case of mortgage rates, but short term rates remain elevated as firms that are sensitive to rate hikes are still shaking off the damage, which is why we're seeing this sector show up in the count of dividend cuts in higher numbers.

Overall, the pace of dividend cuts during 2019-Q2 through this point of time is on par with what we saw during 2019-Q1, where both quarters are well elevated over the same quarters in 2018. We'll wrap up 2019-Q2 in early July.

Until then, one important factor to realize is that while we focus on the U.S. in our analysis, the full scale of the story is much bigger.