In what may now be the leading candidate for most misleading market headline of the year, Bloomberg's "Fed Debate Shifts From Large Cut to Whether to Cut at All", may have set a record in the financial press for being debunked in the article that followed it, falling apart within two paragraphs of actual reporting.

Here are the two paragraphs:

The Federal Reserve’s debate shifted from how much to cut interest rates later this month to whether to move at all after hiring in June trumped the expectations of economists.

Yields on two-year U.S. Treasuries jumped to 1.87% from 1.76% the day before, reflecting reduced odds of the Fed aggressively reducing borrowing costs in the near term. Fed funds futures, which had been indicating some possibility of a half-point rate cut in July before the Labor Department’s data, are now pricing a quarter-point reduction this month, and at one point on Friday even showed that outcome was less than 100% certain.

By "some possibility of a half-point rate cut", the article means the 68% odds that the CME Group's FedWatch Tool briefly indicated for that possibility just over three weeks ago (14 June 2019), which investors stopped considering to be a significant possibility just three trading days later (19 June 2019).

Meanwhile, by "less than 100% certain", we would have to go back in time just nearly as far to find the last time the CME Group's FedWatch Tool indicated anything less than a 100% probability of at least a quarter point rate cut for the Federal Funds Rate being announced after the Federal Open Market Committee's 31 July 2019 meeting. The odds of at least a 0.25% rate cut being announced at the conclusion of the Fed's upcoming July 2019 meeting have been holding steady at 100% since 19 June 2019.

Our best guess is that the reporting for the article was done 2-3 weeks ago, which Bloomberg's editors decided to drop with their misleading "Will they?/Won't they?" clickbait headline when the June 2019 jobs report was released on Friday, 5 July 2019. (We don't fault the author because the article shows signs of having come about through a "by committee" production process. We think it's an outlier for Bloomberg's otherwise very solid market reporting.)

The one thing that did change last Friday is that the stronger than expected jobs report prompted investors to lower the odds of the Fed cutting rates four times during the next nine months, where they now are expecting just three quarter point reductions, one in 2019-Q3, one in 2019-Q4, and one in 2020-Q1.

For the S&P 500, investors sustained their focus on 2020-Q1 as their main point of interest for setting their future expectations, where the trajectory of the S&P 500 is tracking near the middle of the redzone forecast range we added to our spaghetti forecast chart for the index based on that assumption. 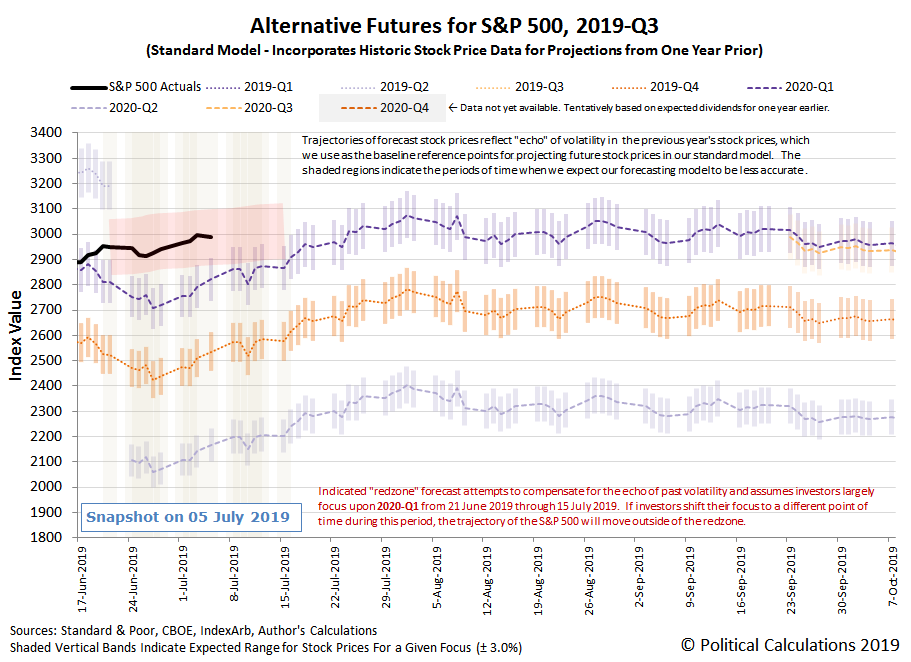 Though it dipped a bit on Friday, 5 July 2019, the S&P 500 rose to set new record highs during the week, closing the week 1.6% higher than in the previous week.

And that's where things stand through the first trading week of July 2019. Here are some other headlines that do a better job describing the content of the articles that follow them from that holiday-shortened week.

Over at the Big Picture, Barry Ritholtz succinctly summarized 6 positives and 6 negatives in the major market and economy-related news he reviewed during the week that was.