Political Calculations
Unexpectedly Intriguing!
July 5, 2019
How Much Pi Do You Really Need? 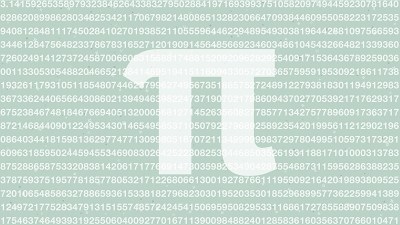 Can you really have too much pi?

Pi, of course, is the mathematical ratio of the circumference of a circle and its diameter, which is both a constant value that holds regardless of the size of the circle in question and an irrational number, which means that when written as a decimal value, the number of digits it takes to precisely represent it both never ends and never repeats.

In fact, if you want to know what the value of pi is when written out through its first one million digits, here you go. The record for the most digits of pi memorized is about 70,000 digits, which took Rajveer Meena over nine hours to recite back in 2015.

But what is the most number of digits of pi that you would need to do any real world math that calls for it?

According to the Jet Propulsion Laboratory, in the physical universe, you don't need to express the value of pi to any more than 39 or 40 decimal places, which in their estimation, is sufficient to represent the size of the universe to an accuracy equal to the diameter of a single hydrogen atom, assuming that the radius of the universe is equal to about 46 billion light years. Which is to say that as a practical matter of daily existence, you shouldn't ever have a need to write out more than the following value in doing math that involves pi:

For the record, when JPL uses pi to do their highest accuracy calculations, they only use the first 16 of those digits.

If you're anyone else, the real question is how much imperfection can you live with?

Each decimal digit we know makes any computation involving pi more precise. But how many of them do we actually need for sufficient accuracy? Of course it depends on the application. When we round pi to the integer 3, we are about 4.51 percent off from the correct value. If we use it to estimate the circumference of an object with a diameter of 100 feet, we will be off by a little over 14 feet. When we add the tenths place, and use the approximation 3.1 for pi, our error is only about 1.3 percent. The approximation 3.14 is about ½ percent off from the true value, and the fairly well known 3.14159 is within 0.000084 percent.

A good practical guide to determining how much pi you need is to consider the amount of error that is built into your measurements, and use only as many digits of pi as what it takes to avoid significantly adding to that built-in level of inaccuracy. Otherwise, you're just wasting your limited time and resources in messing with the additional digits that give the illusion of greater precision, without really getting you any closer to an accurate result.

Time, that could perhaps be better used to estimate the value of pi from using actual pies as your measurement tools, which Matt Parker demonstrated for other reasons back in 2013, but which prove the point in the following video!