Compared to the first two quarters of 2019, Political Calculations' near real-time sampling of dividend declarations from data published by Seeking Alpha and the Wall Street Journal is showing considerably fewer dividend cut announcements.

The following chart shows where things stand nearly two-thirds of the way through the quarter to date: 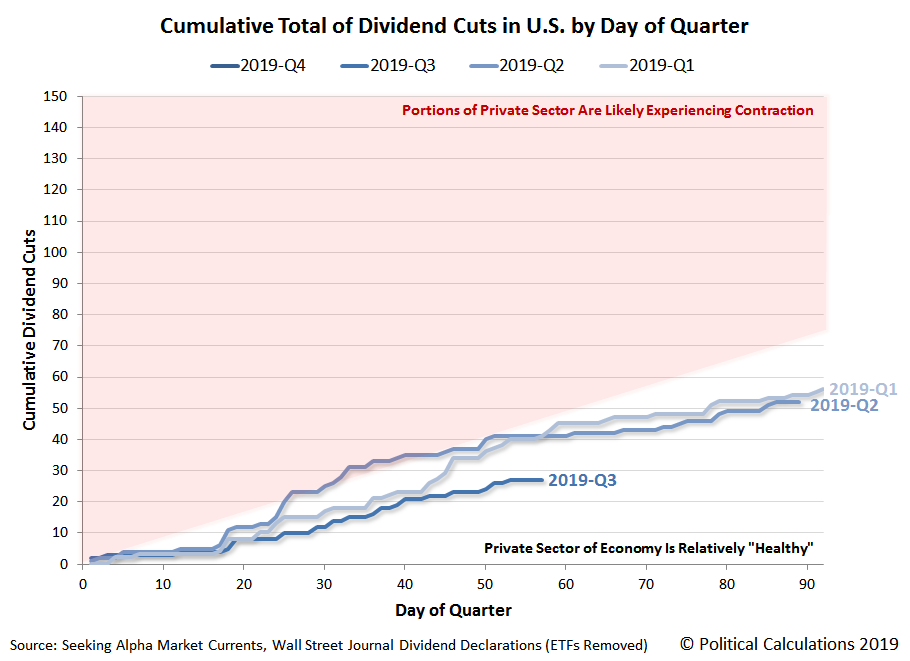 The following list of 14 U.S. firms that have cut dividends during the quarter to date includes only those that pay variable dividends from one period to the next, often as a straight percentage of their earnings.

All but two of these firms hail from the oil and gas producing sector of the U.S. economy, which went through a rough patch with falling oil prices in recent months (late April to mid-June 2019), which will translate into dividend cuts for these firms in subsequent months. Oil prices have risen more recently thanks to geopolitical tensions, where absent a major shock, we should see the number of these firms announcing dividend cuts either hold relatively flat or decline in upcoming months.

A bigger source of concern for investors are firms whose corporate boards set their cash dividend payouts to their shareholding owners independently of their revenues and earnings, where we have counted 12 in our 2019-Q3 sample to date, which we've listed below.

The remaining three firms that fall in this category all come from different sectors of the U.S. economy and includes representatives from the media, insurance, and manufacturing industries.

Overall, we find the near-real time sample of dividend cuts to be consistent with the U.S. economy being relatively healthy at this point, though that may change as geopolitically motivated distress from the developing global economic slowdown works its way westward around the Earth from their points of concentration in the far east. Industrial sectors to pay attention to in upcoming quarters may add the agriculture, automotive, aerospace, and manufacturing sectors to the list of firms from the oil & gas and financial sectors of the U.S. economy experiencing the kind of distress that can lead to dividend cuts.