African swine fever (ASF) is devastating China's domestic hog herd. Starting with an estimated population of 460 million hogs, China has lost at least 100 million hogs, about 21% of the country's total herd, to the infectious and incurable disease, and is expected to see further losses of at least another 10% in the next year. Rabobank projects the losses could reach 50% of the county's overall pig herd before the disease has run its course.

As you might imagine, the growing shortage of domestically produced pork in China has affected prices for the meat, which we're featuring in the following chart, comparing China's prices with U.S. hog prices per hundredweight over the past year. 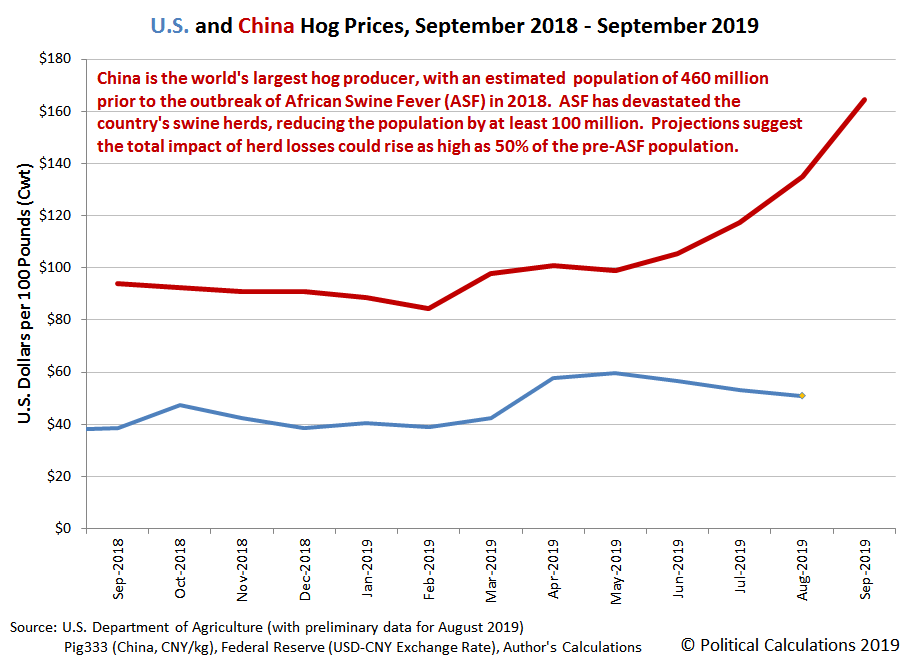 Our sources for the data are below, where we recognize we may not have a proper apples-to-apples comparison between the two countries' hog prices. The U.S. hog prices are for "national base 51-52% lean" barrows and gilts, while the Chinese prices are simply given in yuan per kilogram, which we converted to U.S. dollars per 100 pounds. There may be a conversion factor that needs to be incorporated to make them truly equivalent, where our estimates for the Chinese prices would be off by a consistent scale factor.

As such, the more important factor to consider is the trend in China's prices, which have spiked upward in recent months after having largely paralleled U.S. prices through May 2019. It also appears that Chinese prices may lead U.S. prices, which we'll continue monitoring in upcoming months to see if the spike in Chinese pork prices comes to be reflected in U.S. prices. With China exempting U.S. hogs from their trade war tariffs during the past week to help alleviate the shortages the country is facing, the resulting increase in quantity demanded for U.S.-produced pork should put upward pressure on U.S. prices in the near term, assuming no other changes in the supply and demand for U.S.-produced pork.

In theory, anyway. We'll see what happens in practice.