"Backfire Economics" is a series of posts by Mark Perry that focuses on the unintended, yet often predictable consequences of the tariffs that President Trump has imposed since launching his trade war strategy earlier this year. By our unofficial count, there are at least 24 entries in the series, the most recent one at this writing here, where each focuses on some aspect of how the President's tariffs on foreign-produced goods have negatively impacted U.S. businesses and people.

Until now, we don't think that anyone has applied the "backfire economics" concept to the tariffs that other nations have imposed upon American goods as part of their trade war strategies with the U.S. And we may have a doozy with China's retaliatory 25% tariff on U.S.-grown soybeans, which were clearly intended to inflict economic harm upon American soybean producers and exporters.

But before we can talk about that, we have to talk about a story that we were surprised to see in the news last week, which had the headline "China Is So Desperate for Pork That It's Buying American Again".

It's definitely a clickbait headline, and it worked, because we clicked it and learned that China is experiencing a shortage of pork because of a highly infectious disease called African Swine Fever, which doesn't affect humans but is very deadly for hogs, all the more so because it has neither a vaccine nor an antidote. The first case was reported on 1 August 2018, and since then, it has spread as an epidemic among China's pig farms.

A nightmare is unfolding for animal health experts: African swine fever (ASF), a highly contagious, often fatal disease of domestic pigs and wild boars, has appeared in China, the world’s largest pork producer. As of today, ASF has been reported at sites in four provinces in China’s northeast, thousands of kilometers apart. Containing the disease in a population of more than 430 million hogs, many raised in smallholder farmyards with minimal biosecurity, could be a monumental challenge....

East Asia’s first confirmed outbreak occurred on 1 August in Shenyang, a city in Liaoning province, China’s Ministry of Agriculture says. Investigators have traced the disease back through sales of pigs and concluded the virus has been circulating in the area since at least March, says Wantanee Kalpravidh, a veterinarian at the Food and Agriculture Organization’s (FAO’s) Emergency Centre for Transboundary Animal Disease in Bangkok.

A genetic analysis suggests the virus is closely related to the strain circulating in Russia, scientists from the Institute of Military Veterinary Medicine in Changchun, and other Chinese institutions reported on 13 August in Transboundary and Emerging Diseases. “The increasing demand for pork has resulted in a great increase in the volume of live pigs and pork products imported to China,” heightening the risk of introduction, they wrote. The virus probably arrived in imported pork products, Kalpravidh says, which then infected pigs that were fed contaminated table and kitchen scraps.

Since August, the epidemic of African Swine Fever among China's pig farms, which account for half of the world's population of pigs, has prompted the culling of more than a half-million pigs since it was first detected, where it now "has spread rapidly to more than half of China's provinces despite measures to contain it", with new outbreaks still occurring four months later. 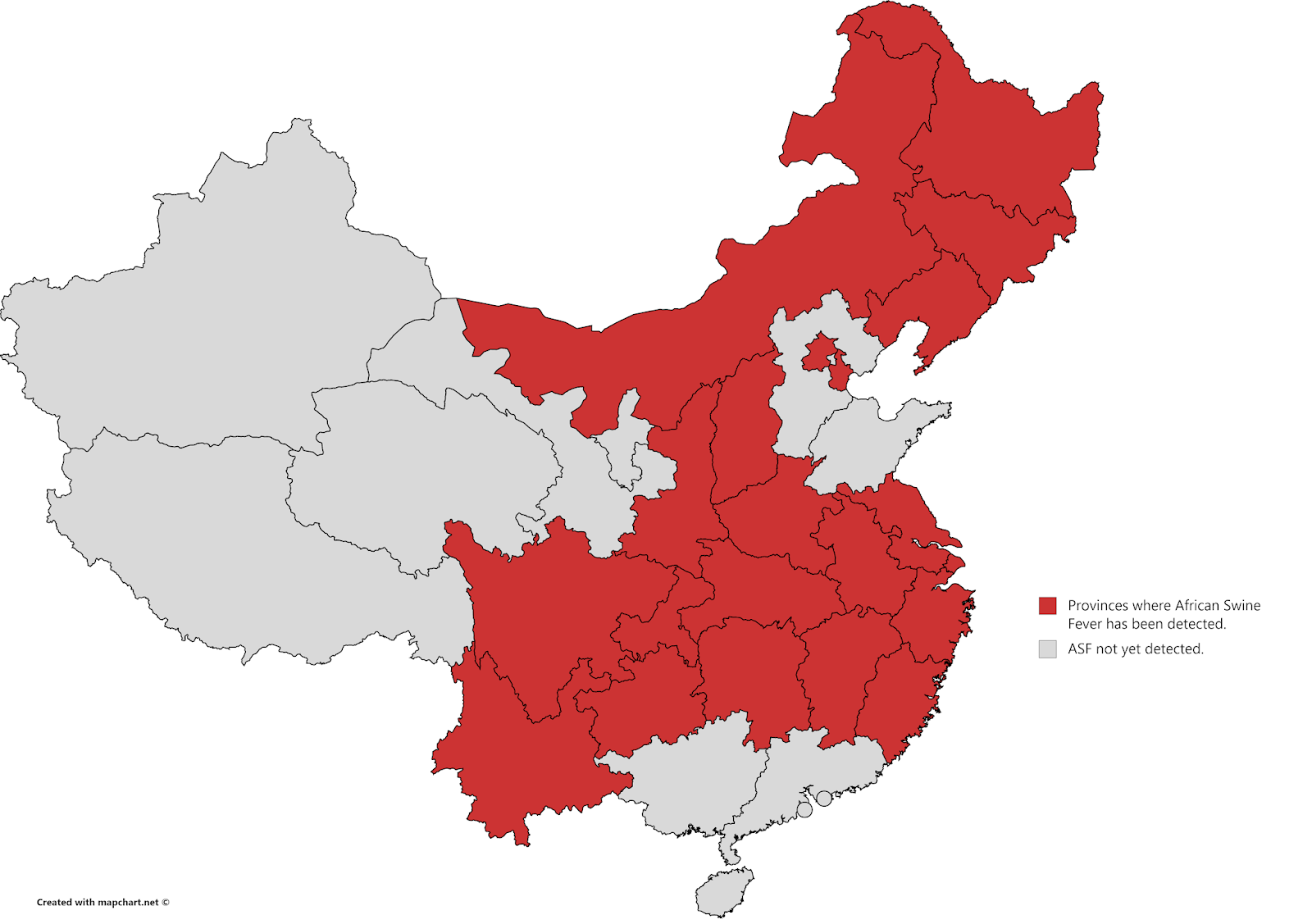 Part of what makes African Swine Fever so contagious is that the virus behind it is very resilient: "African swine fever virus can survive heat, putrefaction, smoking, partial cooking, and dryness and lives up to six months in chilled carcasses. The incubation period is from 5 to 15 days."

That characteristic has prompted Chinese authorities to clamp down on the practices of transporting pigs out of regions impacted by the epidemic and feeding pigs table and kitchen scraps as they seek to gain ground on the epidemic.

China has already banned the transport of live hogs from infected provinces and neighboring regions to prevent the spread of ASF and requires trucks carrying live animals to be registered and to use location-tracking systems.

China has also banned the practice of feeding food scraps and swill to swine.

Note that we keep coming back to the topic of feeding scrap human food, which often features pork as the leading protein in China, to swine. This is where China's retaliatory tariffs aimed at U.S. soybeans may now come into play.

Since imposing a 25% tariff on U.S.-grown soybeans that has led Chinese buyers to shun the crop, China's primary soybean consumers, the nation's swine farms, have had to turn to substitutes for them. Earlier in the year, they were able to substitute Brazilian and Argentinian-grown soybean crops, but that doesn't appear to have been sufficient to meet the nation's demand for the protein-rich animal feed in the latter half of the year. Chinese authorities have responded by both lowering their standards for soybeans and also substituting other crops, where the available replacements likely do not share the the same high protein content that makes soybeans desirable to use as feed in raising hogs.

So what do thousands of Chinese hog farmers, and especially the ones with very small operations, do to fill the protein gap? If you answered "increase the amount of leftover meat scraps they feed to their hogs", you have identified a potentially very serious contributing factor to the rapid spread of African Swine Fever in China, and also a deadly, if unintended consequence of backfire economics in action.

Stopping an epidemic after it has gotten started is a lot like dealing with a cascade failure - it often requires an active intervention to significantly slow the rate of infection. In this case, the ideal intervention would be targeted at breaking the cycle where contaminated meat scraps are fed to healthy pigs, which would mean substituting protein-rich non-contaminated feed for this disease vector.

The ideal substitute would involve buying and distributing large quantities of soybeans, where there is only one source China can turn at this time of year that has a large, harvested crop ready to export to meet its increasingly urgent need: the United States. So that's what China has done, where we now have a new clickbait headline to feature, ripped straight out of 12 December 2018's news: "Exclusive: China makes first big U.S. soybean purchase since Trump-Xi truce. As deals go, China's soybean buyers would appear to be getting a very good one as it is paying about $9.07 per bushel in spending $500 million for 1.5 million metric tons of U.S.-grown soybeans, where they've paid higher prices on average in recent years.

The question now is whether it will be enough in time to arrest the "nightmarish" spread of African Swine Fever among China's hog farms?