The epidemic of African Swine Fever within China is estimated to have "wiped out a third of China's pig population", or about 15% of the world's domestic hog population.

The loss of supply has resulted in a meteoric rise of pork prices in China, which in turn, has compelled China's leaders to seek relief in the global market.

China is scouring the world for meat to replace the millions of pigs killed by African swine fever (ASF), boosting prices, business and profits for European and South American meatpackers as it re-shapes global markets for pork, beef and chicken.

The European Union, the world’s second largest pork producer after China, has ramped up sales to the Asian giant although it can only fill part of the shortfall caused by ASF. Argentina and Brazil have approved new export plants to meet demand and are selling beef and chickens, as well as pork, to fill the gap. U.S. producers, however, have been hampered due to tariffs imposed by Beijing.

But China's leaders have since relaxed the country's tariffs on U.S.-produced pork, reducing them from their previous relatiatory level of 72% down to a pre-tariff war level of 12% on 13 September 2019. Since that announcement, the country's pork imports have surged:

A hunger for imported pork is one reason underlying Beijing’s decision to exempt US pork from additional tariffs, which in turn helped to de-escalate trade tensions and paved the way for resumption of trade talks.

Chinese imports of U.S.-produced pork is tracked by the U.S. Census Bureau under the category of "meat of swine". The following chart shows the annual value of U.S. pork exports to both the world and to China from 1992 through 2018, and the year-to-date value of exports for the first nine months of 2019, where although 2019 is missing data from the final quarter of the year, we can already confirm that China's share of U.S. exports to the world is reaching new heights. 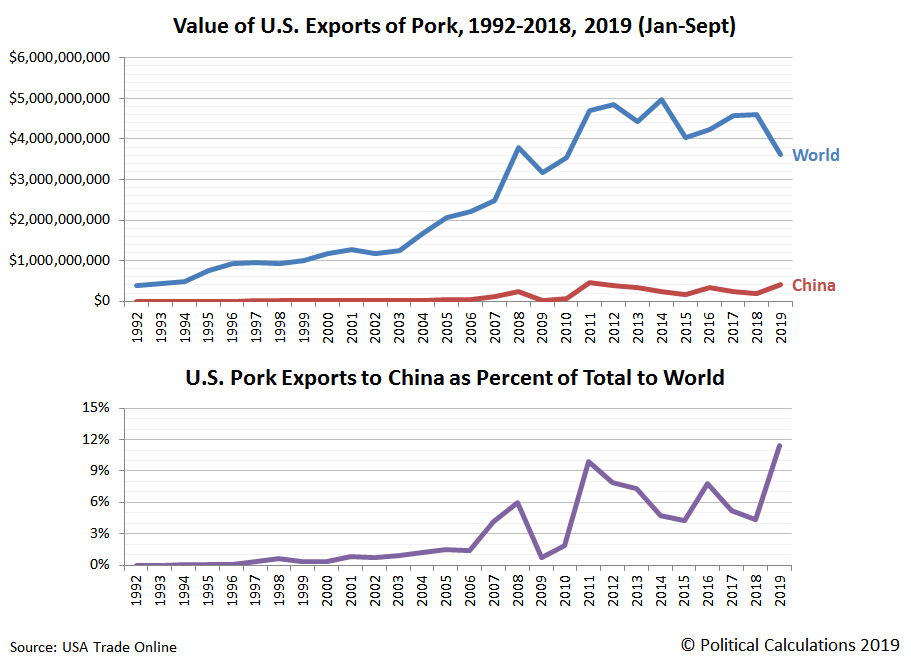 Official reports from China suggest that this increase in pork exports to China may be short-lived, with China's pig herd projected to recover to pre-African Swine Fever levels in 2020.

That projection may be optimistic however because it likely underestimates the full recovery process, where in order to increase China's hog herds, domestic producers will need to retain more hogs to sire the next generations, reducing the number that will be able to be processed for Chinese pork consumption. It's technically possible the size of the herd may recover in 2020, but the amount of meat that reaches China's consumers will remain in shortage, where Chinese demand to import pork will remain elevated for longer.