Dividend paying firms in the U.S. stock market closed out 2019 on a muted note, with the fourth quarter seeing both fewer dividend rises and fewer dividend cuts. Not uncoincidentally, the same can be said of 2019 as a whole.

Here's our tally of dividend metadata for 2019-Q4, where we've compared the fourth quarter's figures to both the preceding quarter, 2019-Q3, and to the year-ago-quarter of 2018-Q4:

And since we're covering the end of the year, here is how the number of dividend increases and decreases compares between this year and last.

The following chart shows the monthly total of dividend rises and reductions from January 2004 through December 2019. 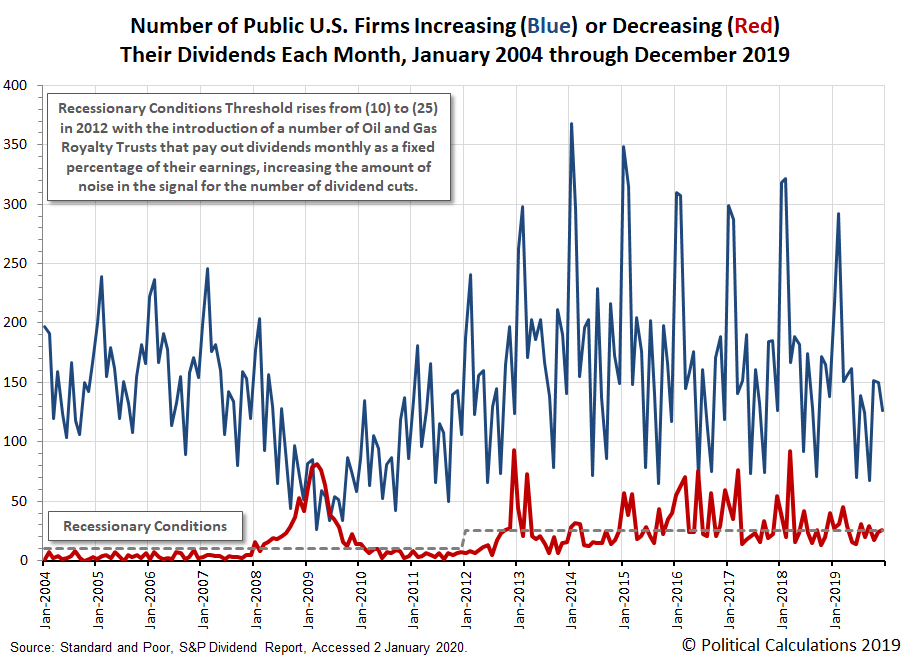 Focusing on the companies that announced dividend cuts during 2019-Q4, we find our near-real time sampling during the quarter mainly consists of firms in the U.S. oil and gas production sector (24), followed by financial firms and Real Estate Investment Trusts (9), manufacturing (2), mining (2), media (2), and finally (1) firm each from the chemical, services, consumer goods, and restaurant industries. Here's the list we compiled from Seeking Alpha and the Wall Street Journal, starting with the firms that set their dividends independently of their earnings and cash flow:

This portion of the list also contains a large percentage of firms from the oil and gas industry whose dividend payouts are very sensitive to changes in oil prices, where falling prices (and revenues) can indicate distressing conditions within the sector, where these firms are much like the proverbial canaries in a coal mine.

The following chart shows how the cumulative number of dividend cuts for all the firms we tracked in our near-real time sampling played out during 2019. 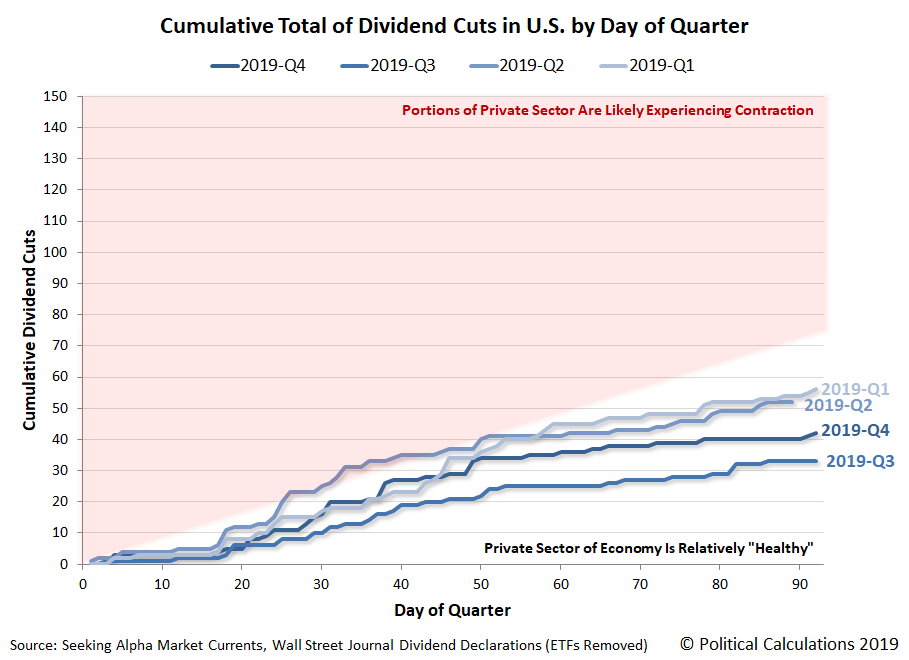 Going just by dividend cuts, 2019 was a relatively healthy year for the dividend-paying firms of the U.S. stock market. 2019-Q1 edged out 2019-Q2 as the least well-off quarter of the year, while 2019-Q3 was the best quarter of the year by a wide margin.

Looking forward, the manufacturing sector may be the one to pay the closest attention to in 2020, where the automotive industry within the sector will likely see 2019's global economic slowdown catch up to them, with U.S. Steel's dividend cut in 2019-Q4 perhaps being the first supporting industry domino to fall and where Boeing's continuing production problems with the 737-MAX commercial transport aircraft likely to take a bite out of the aerospace industry.

If you're wondering about the image featured at the top of this post, we thought it would be fun to feature the excerpt from a vintage ad in this post. That may be because we've recently rewatched Trading Places, where an investment in Frozen Concentrated Orange Juice plays a meaningful role in the plot of the 1983 movie. In any case, the image credit belongs to Washington D.C.'s defunct Evening Star newspaper from 3 December 1936, where the ad appeared on page C-4. The source is the Library of Congress' Chronicling America: Historic American Newspapers archive.