Since our alternative futures spaghetti forecast chart for 2019-Q4 captures the past week, let's update it one last time before we close the books on 2019 for good! 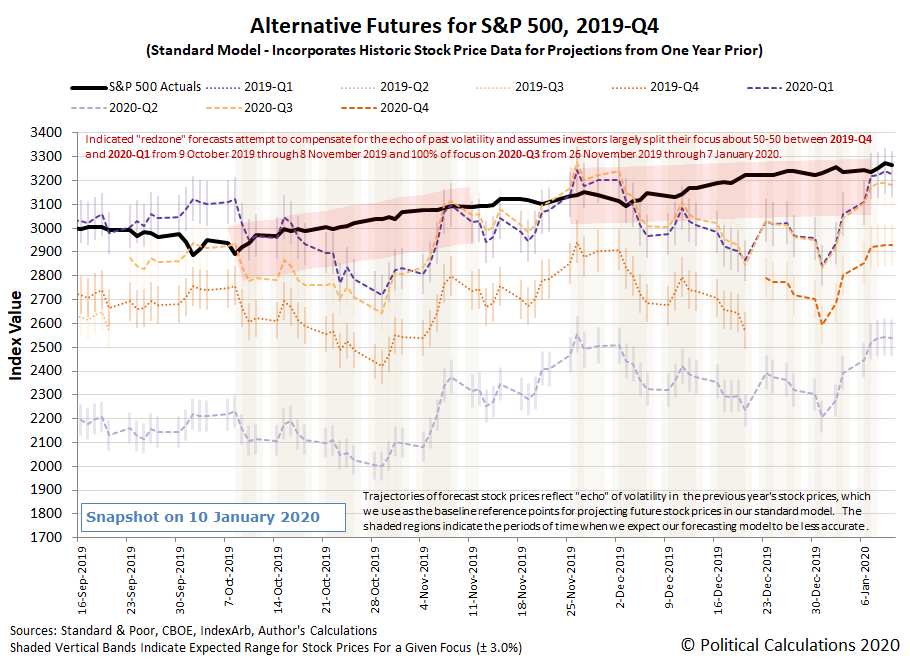 Looking back over all of 2019, we can confirm that the dividend futures-based model we've developed to anticipate the S&P 500's future trajectory was useful, even during the periods where the model was affected by the echoes of past volatility the U.S. stock market experienced in 2018, which arises as an issue because the model uses historic stock prices as the base reference points from which it projects into the future, which is shown as the tan-shaded regions of the following chart displaying the entire year. 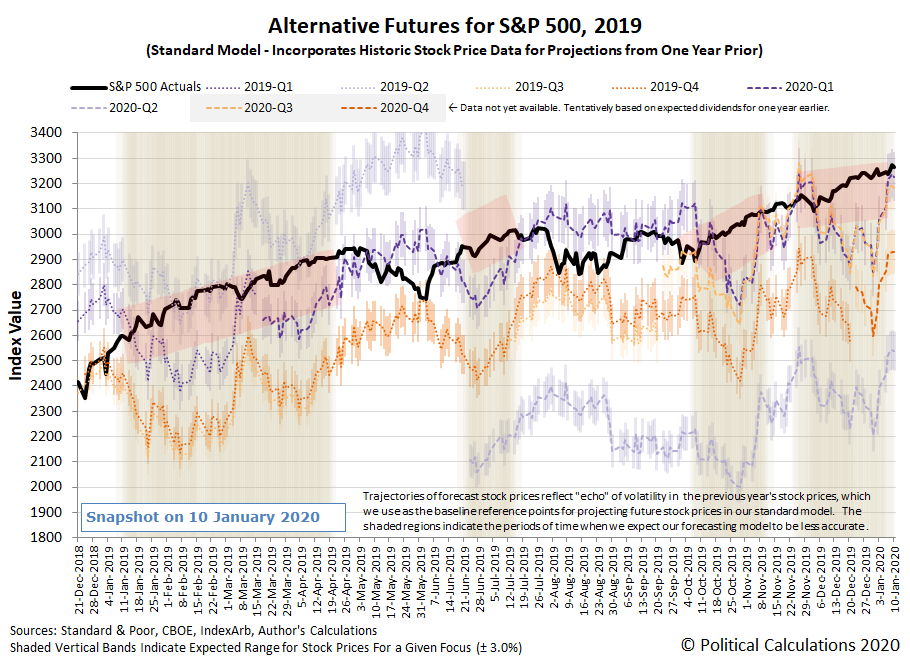 The red-shaded zones in this chart represent the refined forecasts we added to the standard model to account for the echo effect, where we used a very simple method of "connect-the-dots" to essentially connect points of the forecasts on opposite sides of an echo-affected period after making assumptions for what future quarter would hold investors' attention during these periods and how much volatility the S&P 500 could potentially experience.

We also tested using dynamic adjustments to allow the redzone forecast ranges to adapt with changes in future expectations, where we fixed one end of these ranges to a past level of the S&P 500 and allowed the opposite end to float along with the model's standard forecast trajectories. Before 2019, we've simply fixed both ends of the redzone forecasts we've added to our charts, but the very long duration of the first echo-affected period we faced in 2019 made that approach impractical for developing relatively accurate projections.

That was challenging during 2019. As you can see in the chart, the first echo-affected period spanned almost all of the first quarter and extended into the second quarter. The fourth quarter was almost as difficult.

And yet, we managed to pull it off. Fortunately, we will get a bit of a breather before we might need to add another redzone forecast to the alternative futures charts we'll present for 2020, where it looks like we'll have to deal with comparatively short volatility echo-affected periods in 2020-Q2 and in 2020-Q3.

That's enough talk about 2019. Let's review the major market-moving headlines that stood out to us during the first full trading week of 2020, where we find it was relatively quiet, except for Thursday when the Fed's minions were especially active in trying to set the expectations they want investors to have this year.

Barry Ritholtz succinctly summarized the positives and negatives he found in the economics and market-related news during the past week. Do check it out to get a bigger picture of all that was going on in the first full week of January 2020!

This post is part of our SP 500 chaos series, where once a week, we not only update what the future for the S&P 500 looks like, we also reference news articles related to the topics that were influencing investor expectations during the previous week, which you might find useful if you should ever need to reconstruct what investors were considering at various points in the past.

Speaking of which, we'll return to looking forward in time later this week when we introduce the alternative futures spaghetti forecast chart for 2020-Q1!