How much will the coronavirus pandemic affect trade between the U.S. and China?

At this point, that's a big unknown, but with the U.S. and China having come to a 'Phase 1' trade deal that should act to stabilize trade between the two nations following their 2018-2019 tariff war, we can take a snapshot in time of where the combined total value of trade stood between the two countries through the end of January 2020. 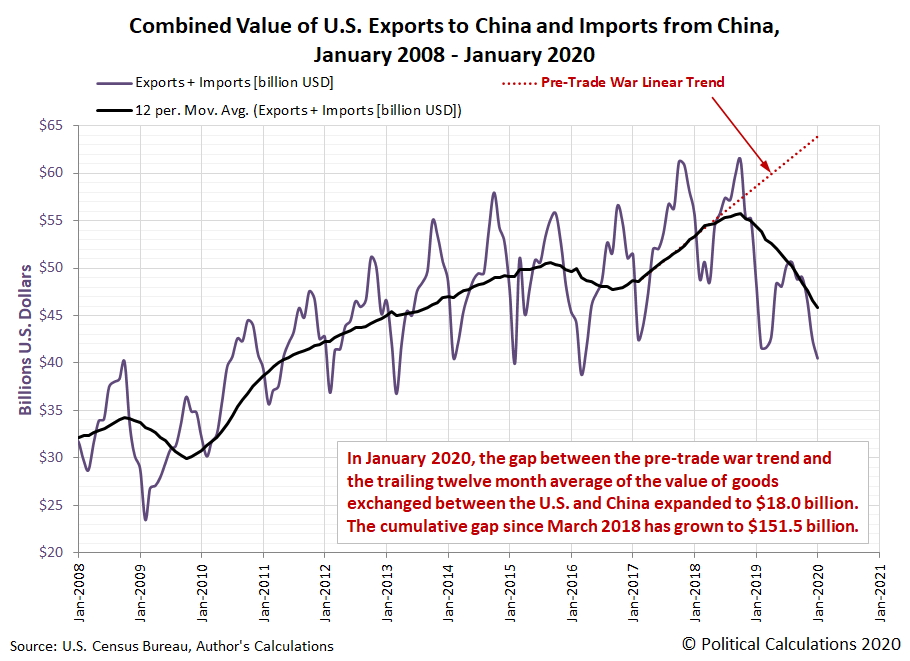 The U.S.-China tariff war had a large, negative impact as measured by the cumulative gap between the pre-trade war linear trend and the trailing twelve month average of the combined value of the United States' exports to China and its imports from China, which had grown to $151.5 billion as of January 2020. That is far larger than the impact of loss trade between the U.S. and China during the Great Recession and its aftermath.

Since the trade deal was officially signed on 15 January 2020, we can argue that January 2020 will represent a reasonable "Month 0" from which to assess the effect of the coronavirus epidemic on the amount of trade between the two nations.

That also works because of the timing of China's Lunar New Year/Spring Festival, where the week long holiday fell entirely within the final week of January 2020. As such, with China's first large scale quarantines going into effect on 23 January 2020 just ahead of the holiday, but growing to keep a large portion of China's work force on forced holiday or unable to travel for business for weeks into February and March 2020, impacting the ability of Chinese firms to produce and transport goods to be exported, the data for February 2020 should start showing the economic impact of losses resulting from the coronavirus epidemic's effect on supply chains between the U.S. and China.

In upcoming posts for this new series, we'll be reworking the chart above to focus on the combined exports and imports data the U.S. Census Bureau will report during the next several months. We'll next revisit this topic in early April 2020, after February 2020's import and export data has become available.