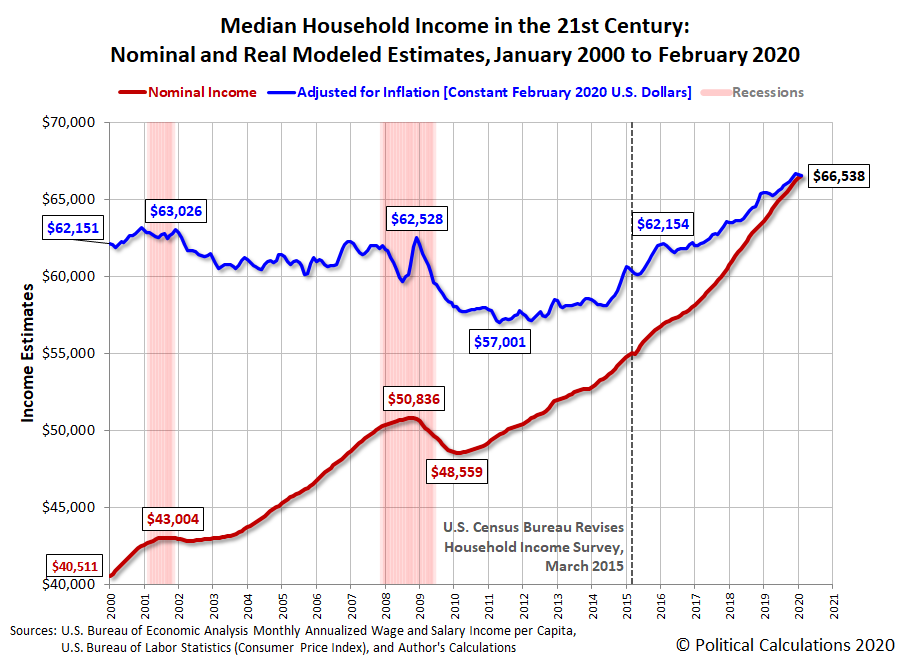 The U.S. Bureau of Economic Analysis released the personal income data used in our analysis on 27 March 2020, having compiled it earlier in the month, most likely before 13 March 2020, when President Trump declared a national emergency for the coronavirus epidemic and certainly before 19 March 2020, when California imposed the first state-wide stay-at-home orders for residents and the widespread closure of businesses, which marks the beginning of a national recession. Through the end of March 2020, three out of four Americans live in states or regions subject to similar orders.

Given that timing, the February 2020 estimate for median household income represents the last data point in the series that will not be affected by the coronavirus epidemic. We anticipate that future data will be subject to substantial revisions given the extent of the disruption to the U.S. economy, which will make our median household income estimates less accurate until the economic situation stabilizes.

Sentier Research has suspended reporting its monthly Current Population Survey-based estimates of median household income, concluding their series with data for December 2019. We'll miss their monthly updates, while we continue to provide the estimates from our alternate methodology.

In other words, we have a pretty good model for estimating median household income in the United States, which the coronavirus epidemic and the response to it is going to put to the test.