But at 3,185.04, it's high enough that we're thinking that investors may have altered their their anticipation for what to expect from the Federal Reserve's monetary policy in the past week, where the alternative futures chart suggests they may now be leaning toward expecting more in the way of expansionary monetary policies. 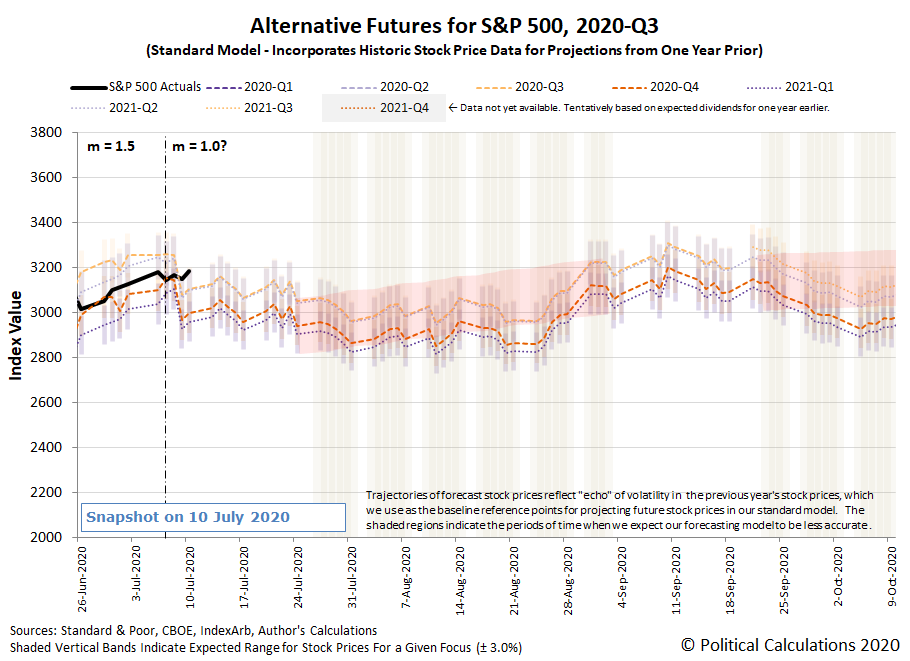 We see that change in the approximate value of the dividend futures-based model's amplification factor, m, which looks like it moved from a value of 1.5 toward a value of 1.0 in the last week. We think that change coincides with comments made by Fed officials on that day pledging more support for a recovery from the coronavirus recession.

Where we don't see any change is in the CME Group's FedWatch tool, which shows a 100% probability of the Fed maintaining its Federal Funds Rate in the zero bound range of 0-0.25% well into 2021. That expectation has been unchanged over the last several weeks.

Meanwhile, the Fed's combination of liquidity injections and lending to U.S. corporations has mitigated a collapse in expected future dividends that would have devasted pension funds and greatly amplified the economic damage from the coronavirus recession had the Fed not intervened to support the stock market. The expected future for the S&P 500's quarterly dividends per share has risen to their highest levels of the past several months, though at this point, that means the S&P 500's are now expected to bottom in 2020-Q4 and stabilize during 2021. 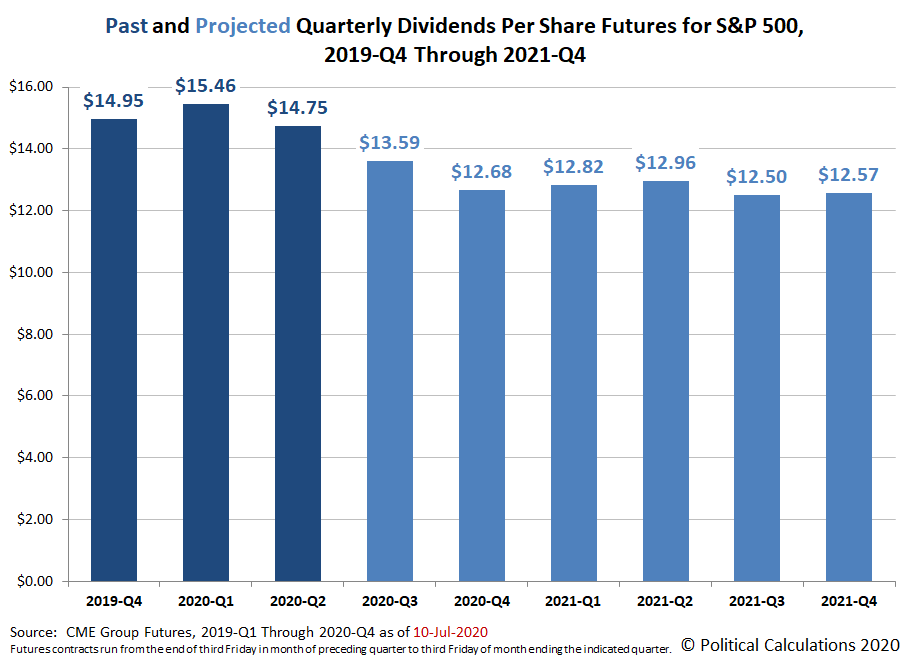 Here's the roundup of the week's major market-moving news headlines.

Over at The Big Picture, Barry Ritholtz divides the markets and economics news of the week into short, succinct lists of positives and negatives.

On a final note, we're thinking we need to take a broader view of the impact of the Fed's monetary policies in continuing to pay attention to the changing value of the amplification factor in the dividend futures-based model. We had been thinking that when it turned negative as the Fed flooded the market with liquidity during the last several months, it was an indication investors were expecting negative interest rates.

To be sure, they were, but the Fed doesn't need to set its Federal Funds Rate to be negative to achieve that effect. During the so-called "Great Recession", the Federal Reserve used its quantitative easing policies to achieve the effect of negative rates (as measured by Jing Cynthia Wu and Fan Dora Xia's shadow federal funds rate), without actually setting negative rates.

The difference between then and now is the Fed has implemented considerably more robust interventions which have transformed the amplification factor from being effectively constant to now be a variable, which means we will have to pay a lot more attention to what the Fed's minions are saying and doing.

Not that we weren't before given their role in setting the future time horizon of investors via their policies of foward guidance, but now their influence goes far beyond that, which the headlines of the past week make clear.

It is an exciting time. We are in new territory. What can possibly go wrong in the Fed's new world?