The state of Arizona reported a record number of new coronavirus cases today, which prompted a negative reaction on the U.S. stock market after it was announced.

The experience of Arizona in becoming the epicenter for COVID-19 in the United States can tell us a lot about why the country is experiencing a surge in the viral infection.

Let's start by reviewing the time series history of confirmed SARS-CoV-2 coronavirus cases in Arizona, which we've continued to refine from our previous analysis. Here, we can combine what we know about the typical progression of a COVID-19 infection from exposure to the onset of symptoms with the lag in reporting confirmed test results to identify significant events that correspond to changes in the rate at which the infection spreads.

The first chart below shows the time series data for newly confirmed COVID-19 cases in Arizona during the four months from 3 March 2020 through 30 June 2020. 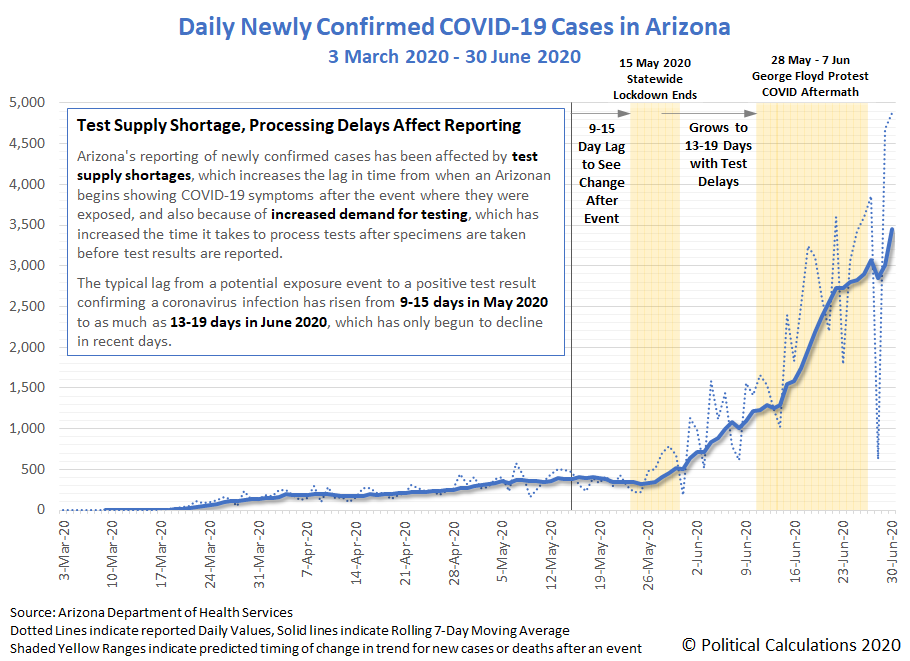 Although the median time from exposure to onset of COVID-19 symptoms falls between 5 to 6 days, Arizona has experienced a variable lag in the reporting of COVID-19 test results. Prior to 21 May 2020, Arizonans with symptoms seeking a COVID test could typically do so within a day, with results typically returned within 4 to 8 days after test specimens were collected, giving an estimated 9-15 day lag between when a change in trend might be observed following a significant event that changed the population's risk of exposure to the coronavirus.

That changed after 21 March 2020, with a shortage of testings supplies increasing the lag from the appearance of COVID-19 symptoms to when a test could be conducted from 1 to 3 days, and also delays in the processing of tests because of increased demand, which delayed test results from being reported until some 7 to 10 days after a patient was tested. Altogether, that increases the expected lag in the reporting of a confirmed COVID-19 case to fall somewhere between 13 to 19 days after initial exposure.

What the chart above shows is that after having been held at relatively low levels until late May 2020, a surge in new cases coincides with the expected lag following the lifting of Arizona's statewide lockdown that closed business and ordered residents to stay-at-home on 15 May 2020. The increase in exposure to the coronavirus that followed then led to the shortage of testing supplies and the increased processing time for test results.

Those delays affect the timing of the next acceleration in the rate at which newly confirmed cases were reported. This secondary surge generally coincides with the expected lag in timing following large scale political protests that occurred in large Arizona cities between 28 May 2020 and 7 June 2020.

While these events overlap the Memorial Day holiday weekend and the following weekend, the steady rate at which the number of confirmed cases rose throughout the period 13 to 19 days after these political protests point to their role as a major exposure event for the spread of coronavirus infections within Arizona. If the holiday and social events occurring on the following weekend were significant contributors, we would see their effect as short duration spikes in the rolling 7-day average of newly confirmed cases during the forecast period.

We can do similar analysis using the reporting of deaths attributed to COVID-19 in the state. The next chart indicates what we find in that data. 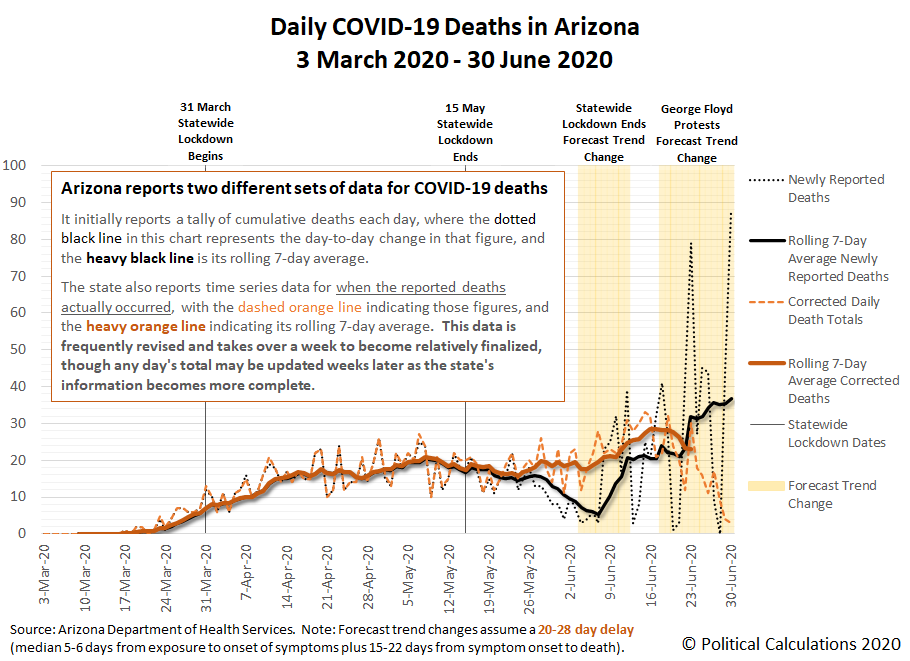 Arizona reports two different sets of data for COVID-19 death. It initially reports a tally of cumulative deaths each day, where the dotted black line in this chart represents the day-to-day change in that figure, and the heavy black line is its rolling 7-day average.

The state also reports time series data for when the reported deaths actually occurred, with the dashed orange line indicating those figures, and the heavy orange line indicating its rolling 7-day average. This data is frequently revised and takes about a week to become relatively finalized, though any day's total may be updated weeks later as the state's information becomes more complete.

That's an important distinction, because the state's initially reported death data has painted a very misleading picture of the spread of coronavirus infections since Arizona's statewide lockdown was lifted on 15 May 2020. In this chart, we see the state initially reported a declining trend in deaths followed by spikes in the number of reported deaths that turned out to be an illusion. It appears Arizona's Department of Health Services has experienced significant delays in reporting deaths related to COVID-19 in the period since 26 May 2020, much of which it has been revising as the actual timing of the initially reported deaths is being corrected.

Those revisions confirm an increase the number of deaths following the lifting of Arizona's statewide lockdown order, which continued up until the period our method forecasts should see another change in trend corresponding to the expected 20-28 day lag in time following Arizona's large scale political protests.

Here, we see a change, but it's not necessarily what you may initially expect. The change has been to swing from an uptrend to a downtrend.

We think that change in trend is attributable to the age demographics of who participated in the protests. The protest participants were primarily made up of individuals under Age 45, who are far less susceptible to dying from the COVID-19 coronavirus than older members of the population, many of whom recognized the threat of spreading infection that might result from these events and avoided them for that reason.

That wasn't the case following the lifting of the statewide lockdown, which is why the daily death toll increased following that event. However, the story for this period isn't fully known because much of the data for deaths will be revised during the next two weeks. The state's demographic data however does confirm an increase in the share of confirmed COVID-19 cases among Arizonans under Age 45 during this period, which supports this observation.

We thought it would be interesting to look at the number of new hospitalizations being recorded daily in Arizona. The third chart shows what we find in that data. 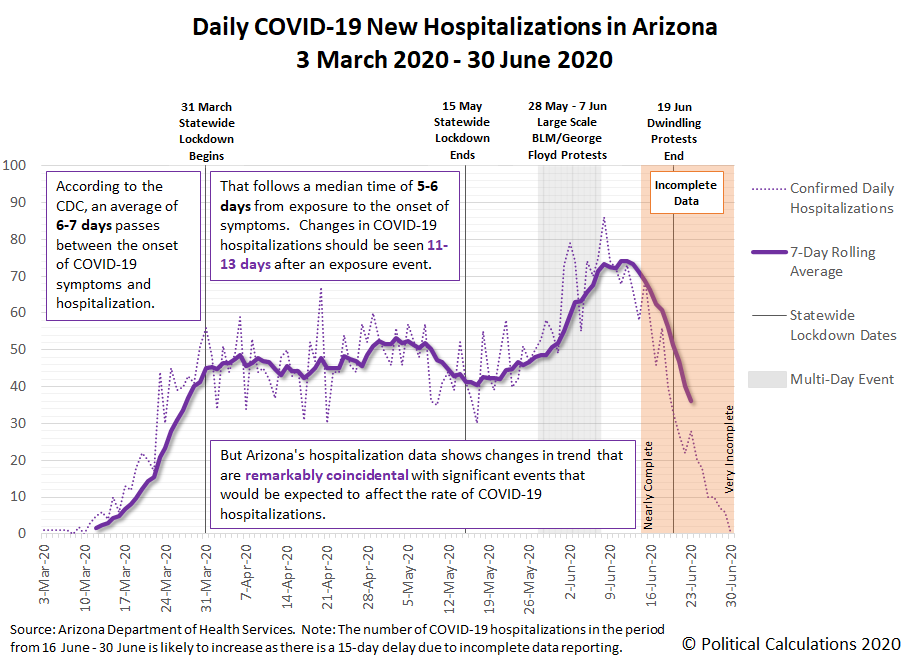 This chart is remarkable because it shows changes in trend that seem to directly coincide with the dates of significant events that would be expected to alter the rate at which coronavirus infections spread within Arizona, rather than occurring after a delay following them. Based on the CDC's data for median time from exposure to onset of symptoms and the average number of days for a patient to go from experiencing symptoms to hospitalization, we would expect to see changes in trend occur some 11-13 days after a change in the risk of exposure.

That's possible, in that the timing of the spike in hospitalizations during the exact period of the 28 May to 3 June political protests would correspond to the lifting of the state's lockdown, but the jury is still out because the reported data for daily new hospitalizations in the period since is still incomplete up to 15 days later. If the expected delays exist, it suggests the sudden flattening occurring just after Arizona's statewide lockdown went into effect on 31 March 2020 was a pure coincidence, where actions taken by Arizonans on their own nearly two weeks earlier is responsible for the actual change in trend that occurred at that time.

That's not to say that the state's lockdown was ineffective, but rather that its main effect was to prolong a steady rate of hospitalization until it ended. As it was, since so much of Arizona's available hospital capacity was underutilized during the lockdown, which came at great cost in lost incomes and jobs, it suggests Arizonans received a very low return on their state's lockdown "investment".

Finally, we thought it might be interesting to look at the number of coronavirus cases by zip code. The following screenshot for data through 30 June 2020 shows expected hotspots around Arizona's main population centers of Phoenix, Tucson, and Flagstaff, but also some unique hotspots near its border with Mexico. (The grayed-out regions of the map within the state are tribal reservations, whose data isn't included in this reporting.) 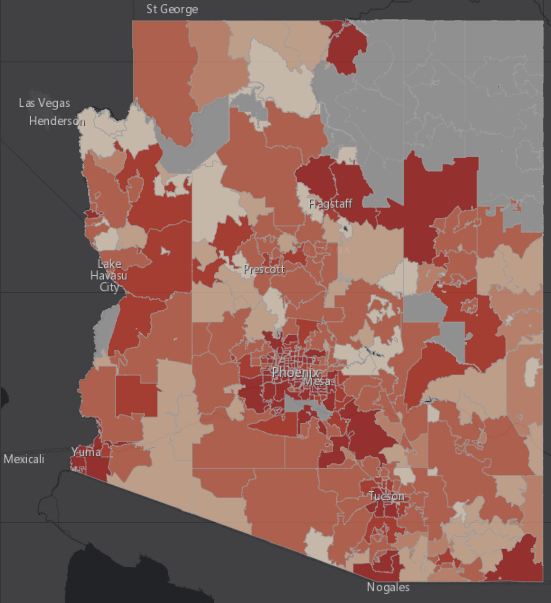 The state's zip code level data indicates three of the state's internal regional hotspots coincide with border crossing points with Mexico near the cities of Yuma, Nogales, and Douglas. The high incidence of cases in these regions is consistent with reporting from California, which identifies the influence of Mexicans who have crossed the border into Arizona to seek medical care, which in turn, has boosted Arizona's COVID-19 infection statistics. That additional contribution would also be seen in the Phoenix and Tucson metropolitan areas, which are within several hours drive of the border crossing points.

Not a Second Wave

In closing, we'll observe that Arizona is not experiencing a second wave of coronavirus infections. Arizona's statewide lockdown from 31 March 2020 to 15 May 2020 appears to have succeeded in flattening the curve for the initial rate of infection, which only means its spread was held at a steady level during the state's lockdown period. With the lifting of the state's lockdown order, its initial wave simply resumed.

At the same time, it was made worse by the political protests that followed the tragic death of George Floyd as he was being arrested in Minneapolis, Minnesota, which took place in many cities around the U.S., often with the support of public health officials who had to know they would greatly increase the population's risk of exposure to the SARS-CoV-2 coronavirus and result in increased cases, deaths, and hospitalizations.

On 30 June 2020, the state re-introduced elements of its coronavirus lockdown policy, ordering the closure of bars, public pools, movie theaters, gyms, and other businesses that are associated with the kind of environment that enables the rapid spread of coronavirus infections, and also delayed the start of its 2020 fall session for public schools, which normally begin in early August. We'll periodically update our analysis of the coronavirus in Arizona to follow how effective those changes turn out to be.

Arizona is far from the only state experiencing a delayed first coronavirus wave. The data for other states tells a similar story, where Arizona mainly stands out because it has one of the largest rates of incidence of coronavirus infections per 100,000 residents in the country.