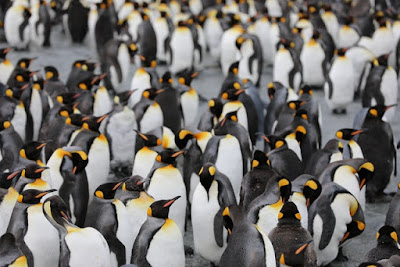 Emperor penguins have developed a unique strategy to cope with the bone-chilling cold winds of winter in Antarctica. They huddle together for warmth.

That may sound trivial, but it is how they huddle together that provides a case study in how a complex order can emerge from the seemingly chaotic behavior of individual penguins who are just looking to get comfortable in the cold benefits the entire flock. In the words of mathematician François Blanchette, what penguins do is an example of "organized chaos", where "every penguin acts individually, but the end result is an equitable heat distribution for the whole community".

But that's not all. In creating that equitable heat distribution, the huddles of penguins also take on a geometric order. Over time, they form oblong hexagonal shapes as individual penguins adopt an optimal packing efficiency that helps them maintain their body temperatures.

Penguins seem to know what mathematicians learned long ago: The densest packing of shapes on a plane is a hexagonal grid. According to Blanchette’s model, the birds arrange themselves as if they were each standing on their own hexagon in a grid. Most huddles start off as misshapen blobs. Wind flow and temperature around the huddle prompt a first penguin — typically the coldest on the windward side — to relocate. This penguin, known as the mover, waddles in search of new neighbors in the relative warmth of the huddle’s leeward side.

The mover selects the leeward-side boundary penguins with the least heat loss as his new neighbors, assuming his new spot without disturbing others. (He may or may not choose a spot that maximizes his new number of neighbors — in this model, all that matters to him is finding the penguins with the least heat loss.) As he settles in, one or more of his new neighbors may now be situated in the huddle’s interior, without ever having moved. Meanwhile, on the windward side, the mover may have exposed a formerly interior penguin to the boundary by leaving his old spot vacant.

As more penguins embark on heat-seeking missions, the huddle’s boundary is in constant flux. Over time, rough shapes in the huddle become defined. The original blob transforms into a regular geometric object: an oblong shape with straight sides and rounded ends.

Here is an image from Blanchette's 2012 paper with Aaron Waters and Arnold D. Kim that shows how a penguin huddle evolves over time as individual penguins move to pack themselves together as efficiently together as possible to regulate their body temperatures to produce the geometric order.

The wildest thing about this paper's results is the authors' model appears to match what Emperor penguins do in real life. A 2018 paper by a team of researchers developed a remote-controlled observatory for behavioral and ecological research on emperor penguins confirms the emergence of the geometric order in their huddles.

... Daniel Zitterbart, a physicist at Woods Hole Oceanographic Institution, helped develop and install high-resolution cameras to observe undisturbed huddling behavior. Zitterbart’s team recently discovered which conditions cause penguins to huddle, and they are investigating the possibility that the penguins’ mathematical behavior may reveal secrets about colony health over time.

To the extent the mathematical model of huddling penguin behavior accurately predicts how real-life penguins behave, it can be very useful for scientists studying the penguin colonies because it may make it possible to divine information like how well fed the average penguin member of a colony is. For example, if the penguins start forming huddles at higher temperatures than the model would predict, it may indicate their collective diet before winter started wasn't sufficient for them to gain enough body fat to withstand Antartica's brutally cold environment.