Political Calculations
Unexpectedly Intriguing!
02 October 2020
Dividends by the Numbers for September 2020 and 2020-Q3

September 2020 continued the positive trend established in the two preceding months of July and August for dividend paying firms in the U.S. stock market.

Here is the dividend metadata for the month of September 2020:

The following chart adds September 2020's number of dividend increases and decreases to the ongoing series of data reported by Standard and Poor since January 2004. Please click here to access a large version of the chart. 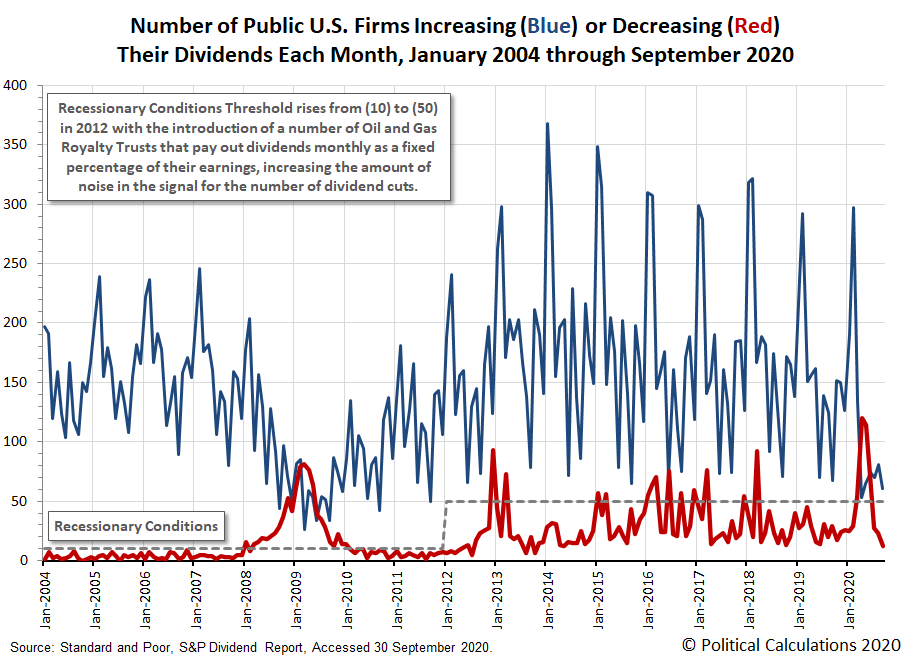 Three solid months make for a solid quarter for the U.S. stock market's dividend payers. We put together the following quick sums to compare the dividend metadata for the good quarter of 2020-Q3 with the worst-ever quarter that immediately preceded it for comparison:

With a quarter-over-quarter improvements like these, it was no wonder that the pace of dividend cuts during 2020-Q3 fell well below the threshold signifying some degree of contraction in the U.S. economy. That's not to say that recessionary conditions were not present, but rather that the U.S. economy likely expanded during the third quarter of 2020. That relative health may be seen in our chart showing the cumulative number of dividend cuts by day of quarter for 2020-Q3, which we've compared with the third quarters of 2017, 2018, and 2019. 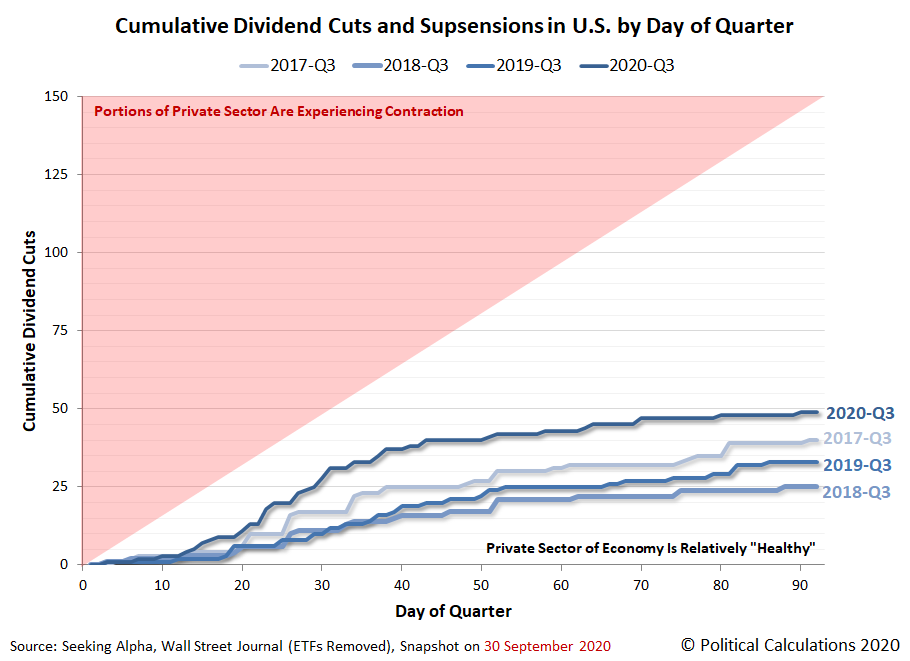 2020-Q3 saw more dividend cuts than each of the other historical quarters shown in the chart, but mainly in the first half. After the first half, the pace of dividend cuts slowed considerably, which corresponds with the U.S. economy gaining traction during the second half of the quarter.

Meanwhile, with S&P reporting just 12 dividend cuts in September 2020, our sample of dividend cutting firms is fairly skimpy with half that number turning up in our near real-time sources for dividend declarations. Here is that very, very short list:

There's an interesting category of firms we haven't had to deal with much in the past that have begun showing up in our sampling. This category consists of firms that either suspended or omitted paying their dividends, but which have since resumed paying dividends to their shareholders, but at reduced levels compared to what they were paying previously. We'll take a closer look at the firms fitting within this definition on their own in upcoming weeks.