Our experiment using the relationship between a company's market cap and its forward year aggregate dividends is overdue for an update. When we last left off, we had narrowed in on where we expected the market cap for General Electric (NYSE: GE) would range based only on the historic relationship between GE's market cap and its aggregate dividends established in the period from 12 June 2009 through 8 December 2017. The idea being to project where GE's market cap might go if it were to slash its dividend, which it ultimately did. The following chart shows what that looks like, but updated with data through the end of 2020, with a bonus data point for where GE's market cap stood as of the end of trading on Monday, 26 January 2021. 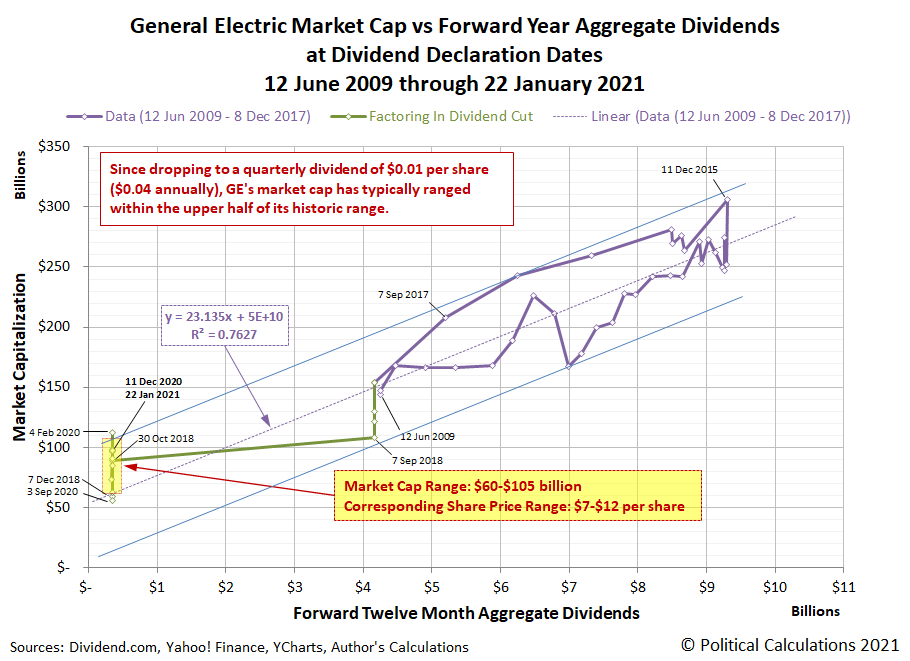 As modeled relationships go, that's pretty clunky. And since we have collected a lot more data points in the period since GE's 2018 dividend cut, we updated the model to include all the data from 12 June 2009 through 11 December 2020. The next chart shows what the updated model now looks like: 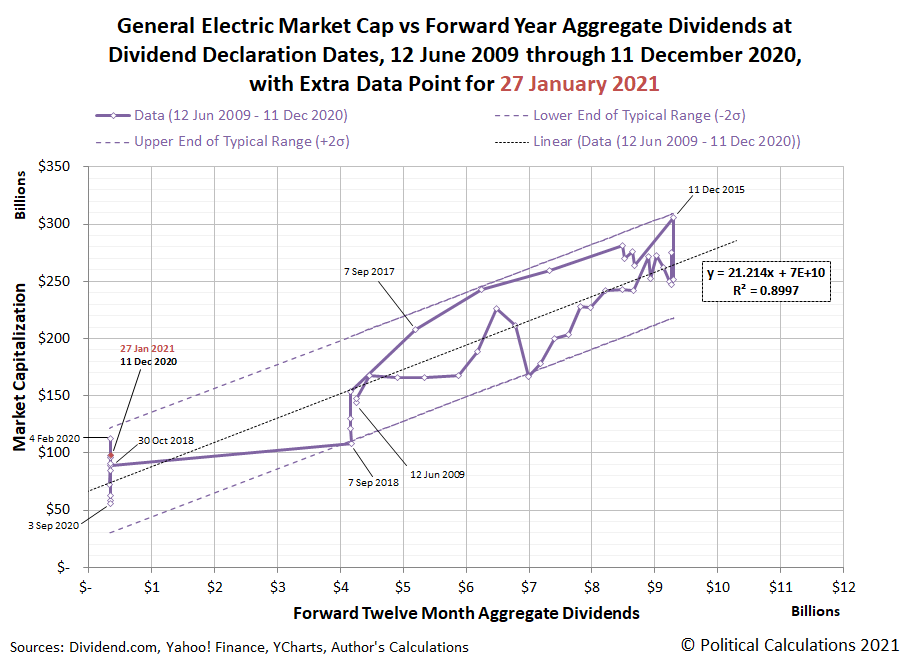 We're also using some basic statistics to show the upper and lower level of what the variation in the historic data indicates is the 'typical' range in which the observations will fall. We've set those levels to be two standard deviations away from the main trend line, within which we would expect the data to fall 95% of the time, assuming the variation can be described by a normal distribution.

As of 27 January 2021, GE's market cap was just above where it was when it last declared dividends on 11 December 2020, which falls within the upper end of the expected range. Should GE's stock price rise above the indicated upper level, unless it is accompanied by the serious prospect of a dividend increase, it could indicate that the company's stock has become relatively overvalued, which would be a strong signal to sell.

So how do you read GE's announcement of its improving cash flow from 26 January 2021? Since a firm's ability to pay dividends depends both on its earnings and cash flow, the rise of GE's cash flow during 2020-Q4 marks a potential turnaround for the long-troubled company. If sustained, GE will be able to afford a dividend rise.

Is that what's going on here? Because if it isn't, the argument that shares of GE are becoming overvalued and its nearing time to sell becomes stronger if its shares are really trading within the vertical range they have since 2018.

Considering this information, if you were an investor holding shares of GE, how would you make your investment decisions?