February is typically a strong month for dividend paying stocks in the U.S. stock market. That's because it is a very popular month for firms to announce they will increase their dividends based on the strength of their fourth quarter earnings. 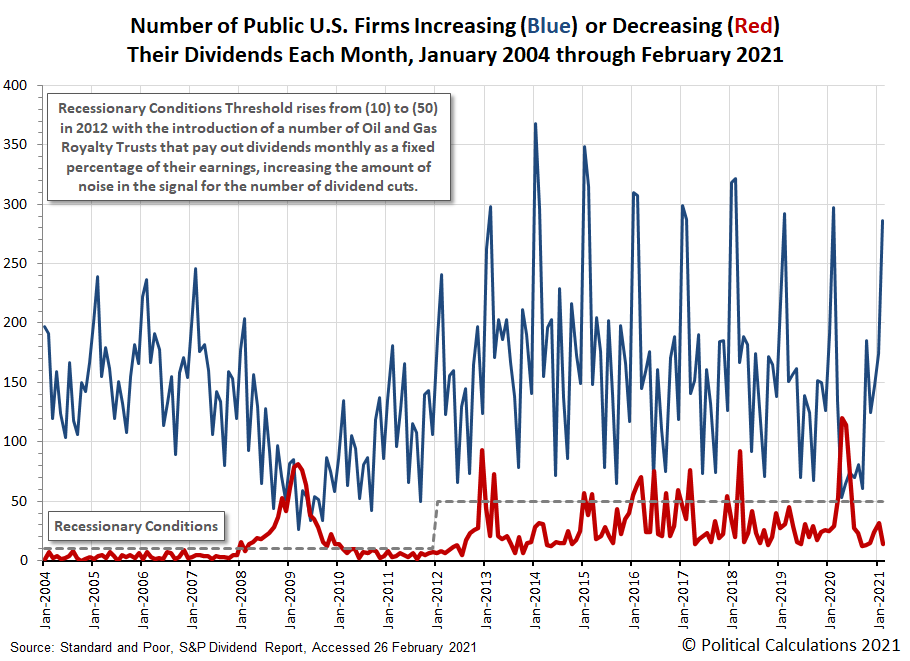 Let's get to February 2021's dividend metadata. Before we proceed however, we need to note that Standard and Poor did indeed revise their tally of the number of extra (or special) dividend payouts announced during January 2021, which turned out to be a considerably larger number than the zero they originally reported! The revised figure is the number we'll be referencing for January 2021's extra dividends below:

Meanwhile, a record 21 firms announced they would resume paying dividends in February 2021 after having suspended (or omitted) paying them during the coronavirus recession of 2020. This is five more than the previous monthly record of 16, which was recorded twice before, in December 2008 and in November 2020.

Since it has only been two weeks since we last reviewed the dividend cutting firms we've found in our ongoing real-time sampling of dividend declarations, we'll simply note the total dividend cuts announced in the first quarter of 2021 is continuing to run well below the pace of the first quarters of the previous three years. We'll next update the list after the end of March 2021, when we present the next update in the Dividends By The Numbers series!

In the meantime, should S&P revise its posted dividend data for February 2021, we'll append the version of this article that appears on our site with that information. Just like we had to for January 2021.