The following chart reveals that recent development in the relationship between the trailing twelve month averages of median new home sale prices and median household income. 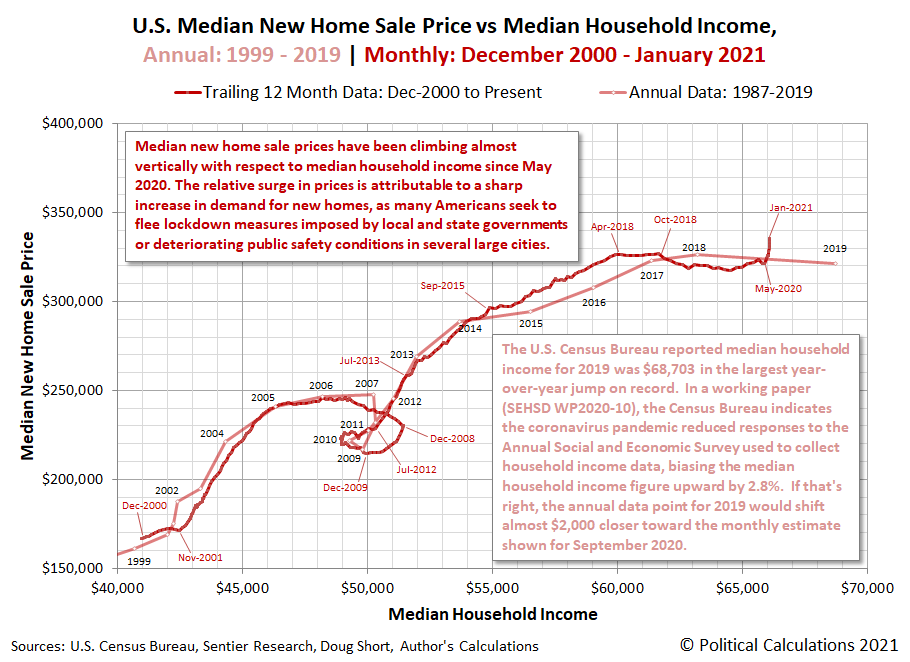 That combination of factors means that the typical new home built in the U.S. has become relatively more unaffordable for the typical American household. 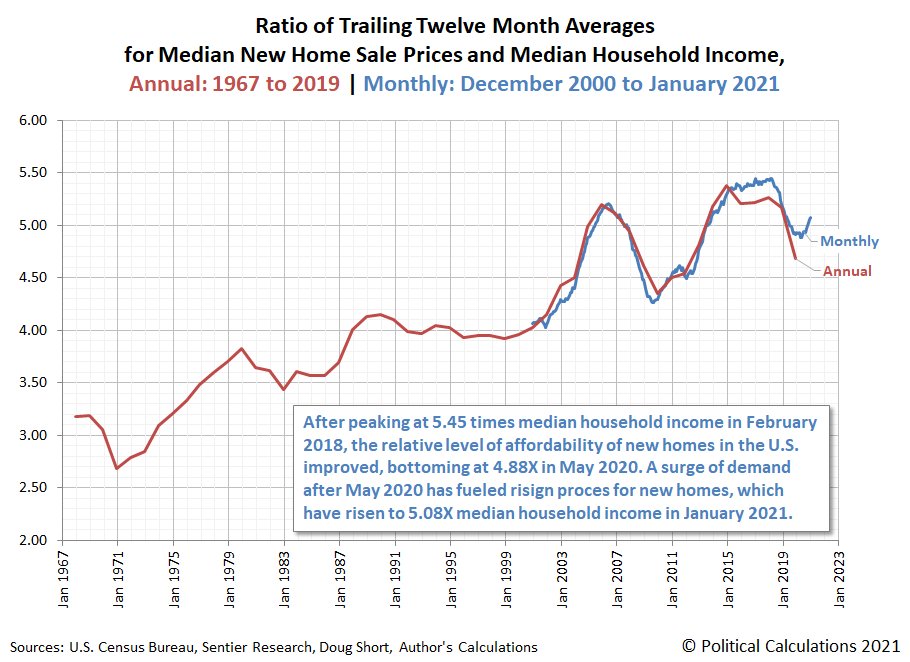 However, a surge of demand after May 2020 has fueled rising prices for new homes, which have rapidly risen to 5.08X median household income in January 2021. The timing of the surge of demand suggests its cause can be found in the responses of state and local governments to the coronavirus pandemic and to the outbreaks of anti-police protests.

Many states and local governments have periodically imposed lockdowns in their bids to slow or reverse the spread of coronavirus infections, in which many businesses are forced to close or to severely limit their operations while residents are ordered to stay at home. Several high population states have imposed especially severe lockdown measures, such as California, Illinois, New York, New Jersey, and Pennsylvania, which have generated population migrations out from these states by businesses and people seeking greater economic freedom. That migration benefits states that have not imposed similarly restrictive lockdowns, such as Arizona, Texas, and Florida, whose economic climates have suffered far less self-inflicted damage from imposing such measures. The lockdown measures themselves appear to have done little to contain the spread of coronavirus infections during the pandemic.

At the local level, the breakdown of public order has affected several large cities following local officials' actions to defund police departments and to reduce criminal prosecutions in the aftermath of the Black Lives Matter anti-police protests and riots at the end of May 2020 and early June 2020. Cities such as Chicago, Minneapolis, Los Angeles, New York, San Francisco, Portland and Seattle, have each experienced significant increases in crimes against people and property as they have become more unsafe, as would be predicted. The resulting decrease of public order in these cities is driving outward migration flows from them, boosting the demand for new homes outside the newly crime-infested jurisdictions.

The consequences of these things together result in the decoupling of median household sale prices from median household income, as the increased demand for new homes is paired with falling incomes.

How long that state of affairs will continue remains to be seen. With most of the responsibility for these conditions lying with elected state and local government officials in high population states, it may well continue until they reopen their economies, lift their stay at home orders, reestablish criminal law enforcement as a priority, or are replaced in office by those who will.