On 15 June 2021, the New York State Bar Association's Task Force on Nursing Homes and Long-Term Care published its report on COVID-19 deaths among nursing home residents in the state.

The report's biggest finding was to confirm the Cuomo administration's 25 March 2020 directive that forced nursing homes to blindly admit COVID-19 patients discharged from hospitals without testing to determine if they were still contagious directly contributed to the deaths of nursing home residents in New York.

The report's appendices contain facility-specific detail regarding the COVID deaths nursing homes reported during the coronavirus pandemic, including whether they died in or out of their facility. It also indicates whether the nursing homes were for-profit or non-profit.

We wondered what differences there might be based on the nursing home facility's for-or-non-profit status, so we did some back-of-the-envelope analysis. Here's what we found. 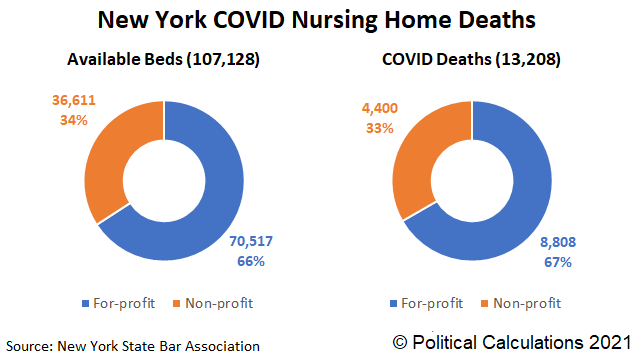 This first chart simply tallies up the number of beds and COVID deaths at both types of nursing home facilities that reported these deaths during the pandemic. In it, we see the share of beds and deaths by facility type are almost identical. That result indicates the type of facility in which nursing home residents died was not a significant factor for those that died from COVID-19.

But we did find a notable difference in the data, which is revealed in the next chart. 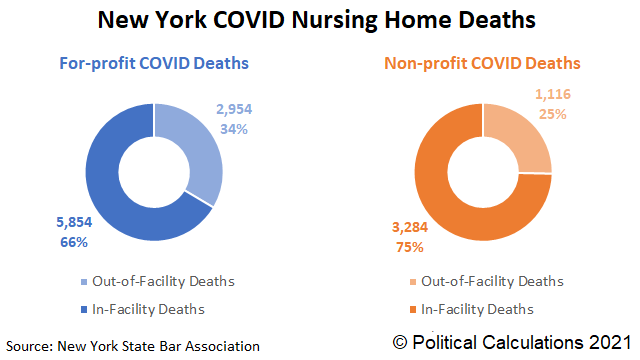 The task force's report doesn't specifically identify that difference, but its data tables suggest the level of staffing at each type of facility is a factor. It's not well quantified, but the report uses "stars" to indicate staffing levels at individual facilties, with lower number of stars indicating lower relative staffing levels. Here, we find both for-profit nursing homes to make up the majority of low star ratings and corresponding higher levels of transferred patients, which generally accounts for the difference.