In a sign the strange new world of innovation is becoming stranger, U.S. District Judge Leonie Brinkema ruled on 2 September 2021 that an artificial intelligence machines cannot be inventors under the U.S. Patent Act. That ruling contradicts rulings made in favor of AI systems being eligible to be granted patents in Australia and in South Africa and may influence patent applications and appeals currently under consideration in a number of other nations.

The case involves two patent applications filed on 29 July 2019 for a "neural flame" (ASN 16/524,350) and a "fractal beverage container" (ASN 16/524,532) filed by Stephen Thaler, whose DABUS artificial intelligence system is listed as the inventor, with Thaler as the AI system's owner listed as the assignee. In the plaintiff's argument advanced in the court case protesting the U.S. Patent and Trademark Office's earlier rejection of patent awards, Thaler would be the owner of any patent awarded for inventions generated by the artificial intelligence.

But as the judge ruled, because the AI system does not qualify as a person under the U.S. Patent Act, no U.S. patent will be awarded. Consequently, the U.S. patent office's rejection of the two DABUS' patent applications was upheld.

Rather than delve further into the legal considerations, the Inventions in Everything team was curious to see what kind of patentable innovations the DABUS AI system came up with. Here's the basic abstract describing the neural flame, whose purpose is to attract human attention:

The present invention discloses devices and methods for attracting enhanced attention. Devices include: an input signal of a lacunar pulse train having characteristics of a pulse frequency of approximately four Hertz and a pulse-train fractal dimension of approximately one-half; and at least one controllable light source configured to be pulsatingly operated by the input signal; wherein a neural flame emitted from at least one controllable light source as a result of the lacunar pulse train is adapted to serve as a uniquely-identifiable signal beacon over potentially-competing attention sources by selectively triggering human or artificial anomaly-detection filters, thereby attracting enhanced attention.

A container for use, for example, for beverages, has a wall with and external surface and an internal wall of substantially uniform thickness. The wall has a fractal profile which provides a series of fractal elements on the interior and exterior surfaces, forming pits and bulges in the profile of the wall and in which a pit as seen from one of the exterior or interior surfaces forms a bulge on the other of the exterior or interior surfaces. The profile enables multiple containers to be coupled together by inter-engagement of pits and bulges on corresponding ones of the containers. The profile also improves grip, as well as heat transfer into and out of the container.

Because it's more visually interesting than DABUS' neural flame invention, here's an illustration of the AI system's fractal container: 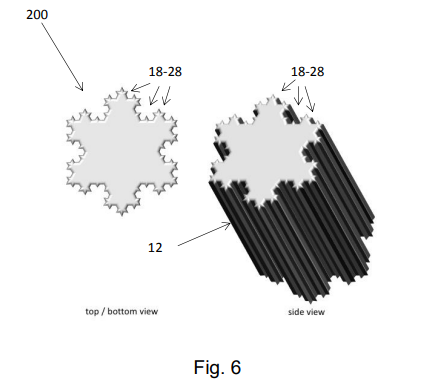 Fans of fractal geometry will recognize the profile of the Koch Snowflake. The novel application that would be potentially patentworthy is its application for use as a beverage container, where the combination of an infinite perimeter with a finite cross-sectional area would in fact make it useful for transferring heat through its sides either to or from the beverage or fluid contained within. Here's an video overview of the Koch Snowflake from the Khan Academy:

The invention would have use in applications where its desirable to rapidly transfer heat either into or out of the sides of the container, such as in cooking, where fluted ramekins are often used for that purpose.