How important are your first 10 years of investing to your retirement?

If you're like most people, money is really tight when you're starting out on your own. Between bills to pay and social expenses that eventually transform into growing family expenses, it can be easy to choose to put off saving for retirement. And with your whole adult life ahead of you, you might conclude you can put of saving for later.

But can you afford to that if you want to retire with any kind of comfort?

What started us thinking about this topic is a recent article by Nick Maggiulli, entitled "Go Big, Then Stop". In it, he explores an investment strategy that really exploits the miracle of compounding, but we'll let him describe how it works:

What I’m talking about is a savings philosophy so effective that it can put your future finances on easy mode. It can help you to build wealth for decades while you literally do nothing. It may just be the lowest effort way to set yourself up for a nice retirement. How does it work?

You save as much as you can as early as you can, then you stop saving altogether (if you want). Go big, then stop.

Why is this strategy so effective? There are two reasons:

The first point is mathematical. If we assume that markets compound by some positive rate each year (on average), then money invested earlier will grow to more than money invested later.

The second point, however, is behavioral. It takes all sorts of willpower and planning to save money throughout your life. However, when it comes to compounding your money, it takes almost no effort at all. All you have to do is wait and the market does the hard work for you.

In the discussion that follows, Maggiuli emphasizes the role of saving and investing as early as possible to build up a large stake toward your retirement, particularly during the first 10 years after you start earning an income. After that, you can let compounding through interest or dividend reinvestment do the most of the work of building up your retirement savings.

We were curious to see how that strategy might work with historic data for the S&P 500 (Index: SPX). We tapped our Investing Through Time tool, which incorporates all the price and dividend data we have for the index since January 1871.

We then considered what 10 years of investing $100 a month in the S&P 500 index would be worth if an investor started investing in June of each year from 1976 through 2011. Our first chart summarizes our results. 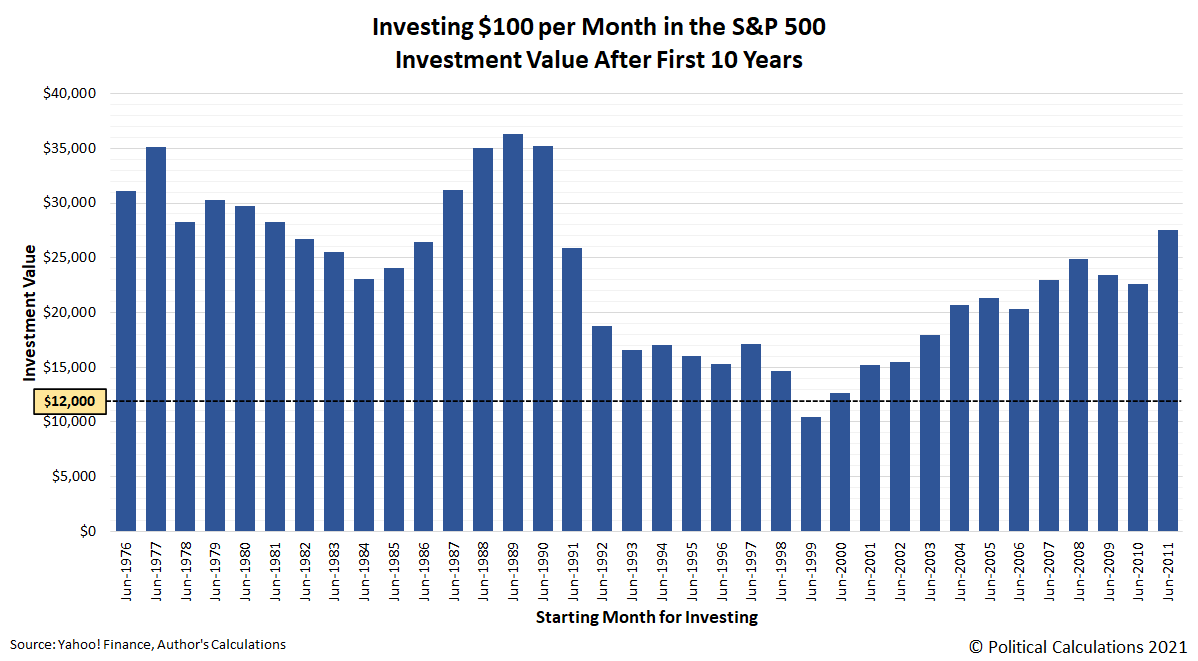 Regardless of year, our hypothetical investor has put a total of $12,000 into their investment from the time they began investing. As you can see, their results can vary considerably depending on when they started. All but one of these 10-year periods produced positive returns. Only an investor starting in June 1999, which coincides with both the Dot-Com Bubble at the start and the aftermath of the 2008-2008 Fiscal Crisis/Great Recession market crash at the end produced a negative return.

Next, we ran two calculations to answer two questions. How much would these investments be worth as of June 2021, the month ending the most recent quarter for which we have full data at this writing, if...

The following chart visually presents the results of those calculations: This chart really drives home the benefit of building up a retirement stake as early as possible after starting working. With full reinvestment of dividends over long periods of time, compounding delivers exponential growth. More significantly, the portion of the $100 monthly investments made during the first 10 years of investing makes up the majority of the final value of the investment for all years.

That latter observation becomes clearer when we calculate the percentage of the portion attributable to the first 10 years of investing to the full value of the investment if the investor continued putting $100 a month into the index through June 2021. 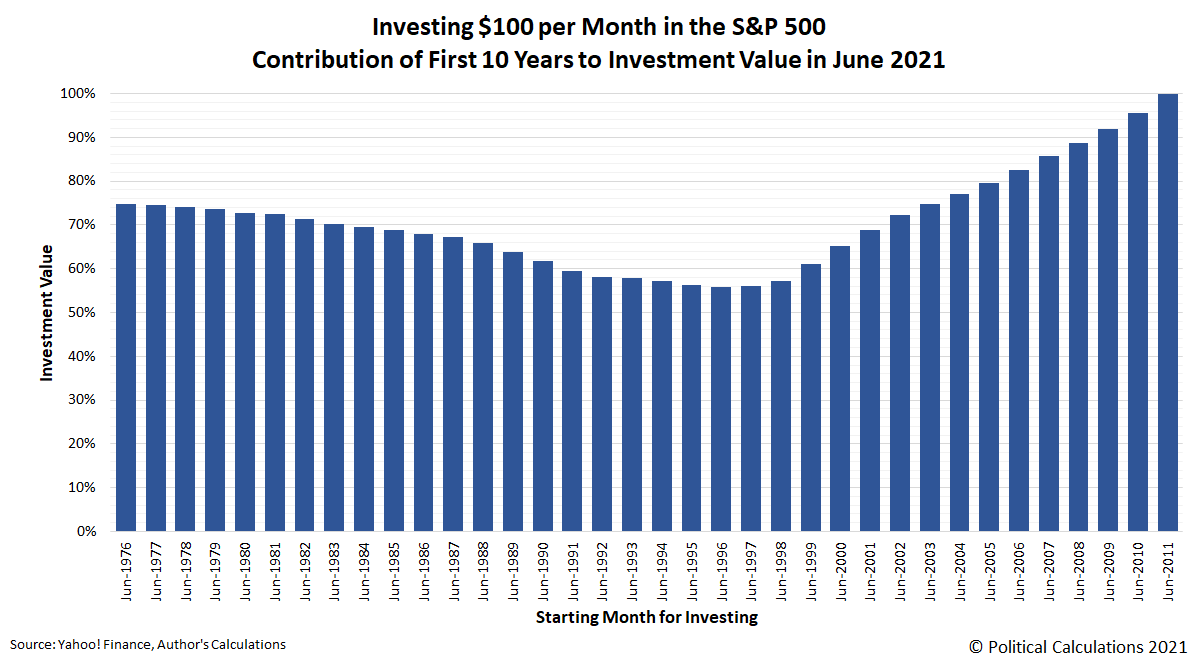 We've kept things relatively simple for this analysis in setting a fixed amount to invest in the S&P 500 each month. In June 1976, that would have been quite a substantial sum to set aside, but with inflation and rising income growth over time, is something that would become progressively easier to do each month. In that sense, this scenario follows Maggiuli's "go big early, then stop" investment strategy.

For the strategy to really work, you would also need to have the discipline to let the investment ride over a long period of time to let the compounding magic of dividend reinvestment do its work.

All said, it can be a good investment strategy, but as Maggiuli recognizes, it is not necessarily for everyone. We do recommend reading through his full discussion.