That's according to the results of the American Farm Bureau Federation's annual survey of the cost of a Thanksgiving dinner were released one week before Thanksgiving 2021. In the following chart, we've visualized the Farm Bureau's year-over-year comparison of the costs of the food in their traditional Thanksgiving turkey dinner shopping list. 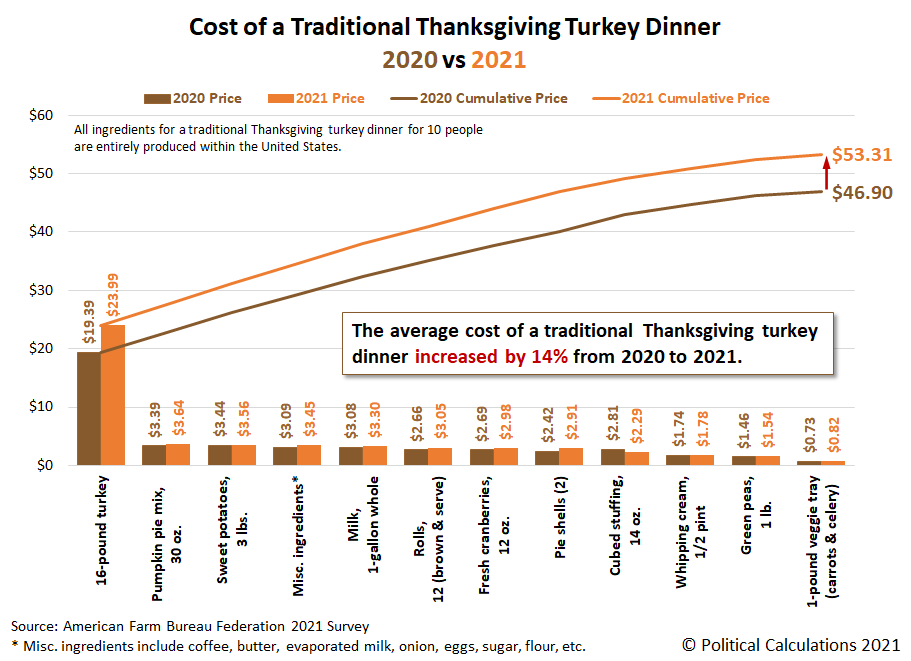 In the chart, we've ranked the cost of the individual items and groupings used by the Farm Bureau for their traditional turkey dinner menu from high to low according to their 2021 cost as you read from left to right. We've also tallied the cumulative cost of the meal, with the totals for each shown on the far right side of the chart.

Why are turkeys so much more costly in 2021? Here's a partial explanation:

Last Friday, the USDA's Turkey Market News Report showed that smaller 8- to 16-pound frozen turkeys were selling for $1.41 per pound, up from $1.15 the year before, a 22 percent increase. Large frozen turkeys were selling for a couple cents less. Meanwhile, fresh small birds were more expensive — $1.47 per pound — though the year-over-year increase was less, only 15 cents. Exacerbating the issue is that the total number of turkeys for 2021 is also down: six percent lower year-to-date in 2021 than in 2020.

Justin Benavidez, assistant professor of agricultural economics with Texas A&M's AgriLife, told the nearby KRHD News that this decreased production was the primary cause of the price increase. "This is actually one of those rare situations where the pandemic didn't have much to do with the supply and demand of turkey," he was quoted as saying.

But Gregory Martin, a poultry educator with Penn State Extension, didn't entirely agree, instead pointing to larger inflation concerns. "Prices are going to go up simply because of the cost to get the birds in the store," he told Lancaster Farming.

We'll be looking closer at American turkeys all this week!