As part of our usual day-to-day analysis, we sometimes come across fascinating information that deserves attention all to itself. That's the case with today's data visualization featuring the 20 biggest grocery store chains in the United States by number of store locations. 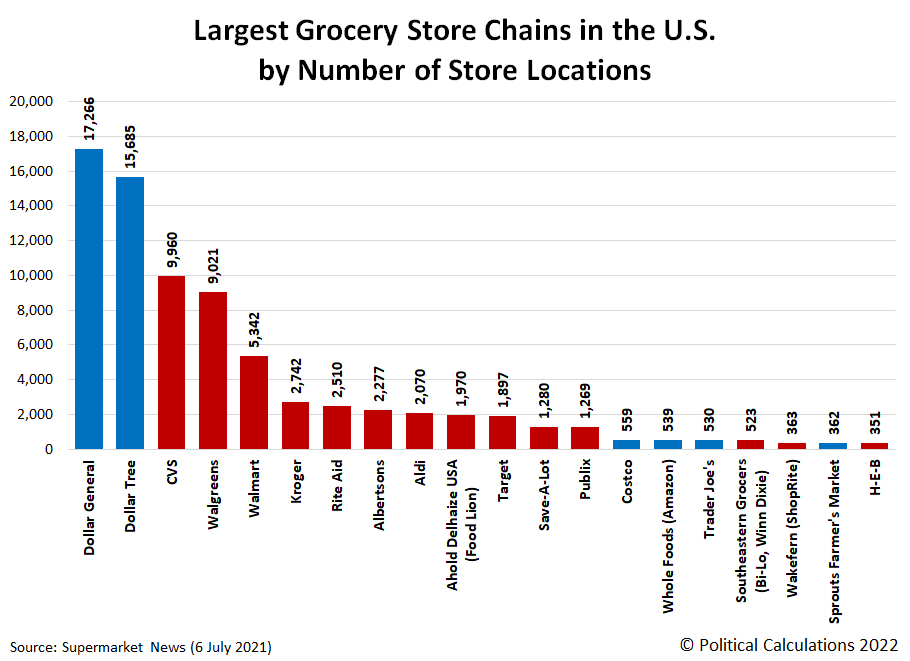 For the visualization, we've omitted several convenience store operators who operate large numbers of stores that are better known as places to refuel motor vehicles than they are as places to buy food and pantry items. We have however included drug store operators because they make a point to regularly advertise these kinds of grocery items in their weekly ads.

By far, the most numerous chains are represented by Dollar General with 17,266 locations and Dollar Tree with 15,685 outlets, which are followed by drug stores CVS with 9,960 outlets and Walgreens with 9,021 stores. Walmart ranks fifth by number of outlets, with 5,342, but ranks first in food sales.

But the largest supermarket operator (which omits Walmart under that classification) is the Kroger family of stores, with 2,742 locations across the U.S.

In the chart, we've highlighted the grocery store chains where you can regularly buy an iconic No. 1 "picnic" (or 10.75 oz) can of Campbell's Condensed Tomato Soup in red. That omits warehouse wholesaler Costco, which often carries Campbell's Chicken Noodle Soup (but not Tomato!). It also omits German-owned discount grocers Aldi and Trader Joes, as well as U.S.-based organic grocers like Amazon's Whole Foods and Sprouts Farmers Market, none of which carry Campbell's Soups (though you can buy it through Amazon's web site).

The biggest surprise for us was to find that Dollar General and Dollar Tree did not sell Campbell's condensed tomato soup in its most iconic packaging either. While these value-oriented grocery stores do in fact sell Campbell's Condensed Tomato Soup, they do so in larger volume cans. As a final personal finance tip, if you're looking for the most tomato soup for your money, you'll get the best value in buying the 15.2 and 14.3 oz cans of Campbell's Condensed Tomato Soup that these discount grocers carry in place of the 10.75 oz can.

Update 29 January 2022: We're happy to report that discount grocer Aldi is indeed a purveyor of Campbell's Condensed Tomato Soup's 10.75 oz. cans! We've updated the chart above to indicate that status (here is the original version of the chart that showed Aldi's bar as blue rather than red).