Political Calculations has previously reported upon various aspects of the Federal Reserve's research into the connection between personal earnings and the level of education of people in the U.S., but that connection presumes that the people are employed and are able to generate earnings. What if we instead looked at the connection between unemployment and education level? What patterns would be found?

Rob Valleta and Jaclyn Hodges of the San Francisco branch of the Federal Reserve have analyzed the recent history of unemployment in the U.S., focusing upon the demographic factors of age and education in contributing to the long term decline of unemployment levels. Their findings are contained the the Federal Reserve Bank of San Francisco's Economic Letter for July 15, 2005. Although the study contains some very interesting correlations between age and umemployment, we'll mainly focus upon the connection between education level and unemployment below.

One of the neat things about the San Francisco Fed's report is that the authors provide charts illustrating the general trends in unemployment over the period from 1976 to 2004, and break out the unemployment data by the level of education. Here is their chart showing the overall trends in the level of unemployment: 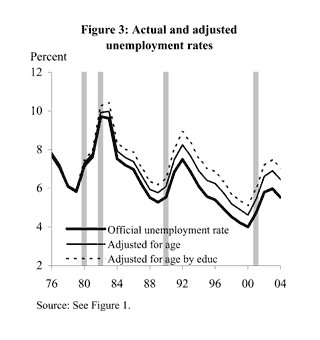 The data presented in the chart above is based upon the report's authors' calculations from monthly Current Population Survey (CPS) files of annual averages of quarterly data. The shaded areas represent periods of recession.

Overall, we see a pattern of declining unemployment levels, which the authors attribute to the aging of the labor force and the increase of their average level of education. Now, let's look at the authors' chart that shows the unemployment rate by education level: 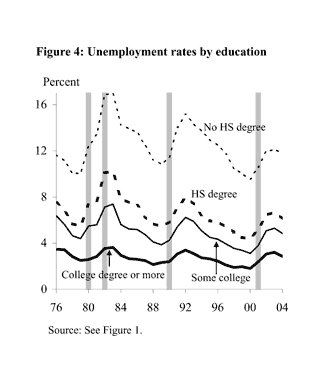 Valleta and Hodges' report also provides some eye-opening data with respect to the correlation between age and unemployment, but that is worthy of separate analysis. In the meantime, if the promise of greater income isn't enough to encourage your kids to further their education, perhaps the odds of even having the opportunity to even have a job will convince them of the importance of staying in school.