What would any discussion of the Thanksgiving holiday be without the centerpiece of the celebration that it is built around: the turkey? In just looking at this one item in the period from 1989 through 2004, we can see the phenomenal growth of U.S. productivity – particularly in agriculture. We will begin by looking at the number of turkeys produced each year in the United States: 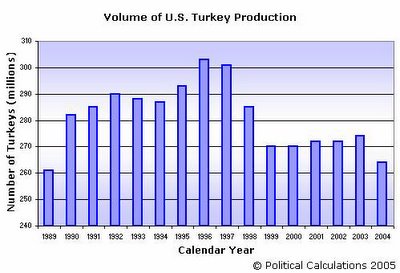 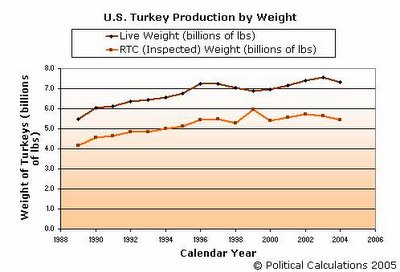 Aside from noting the spike in the RTC Inspected Weight in 1999, which is likely an error in the data source for these statistics, we see that the produced weight of U.S. turkeys has trended upward from 1989 through 2004. Going back to the turkey production volume data, we would expect to see that trend up to 1996-1997, followed by a drop as the number of turkeys produced in the U.S. has declined by 13%. Instead, we see that the weight of turkeys produced in the U.S. has continued to trend upward.

How is this possible? In a nutshell, it is because the U.S. turkey farmer has become dramatically more productive, raising fewer turkeys, but much larger ones! The following chart was generated using the data reported above and shows the average weight of the U.S. produced turkey from 1989 through 2004: 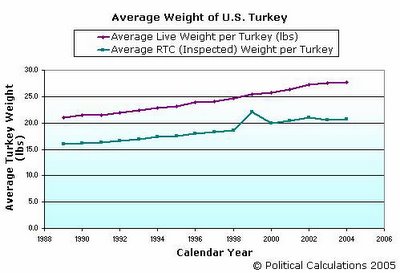 So, there you go – the U.S. turkey farmer is remarkably more productive today than the turkey farmers of 16 years ago were. And for what it is worth, at least now you have something to say about turkeys around your Thanksgiving dinner table that doesn’t have anything to do with that substance in it that makes you sleepy!