U.S. politicians are once again grandstanding on what level the federal minimum wage should be set, with the latest proposal just rejected. But it may all be a moot point as the number of minimum wage jobs in the U.S. has substantially declined even while the size of the total workforce has grown!

The following chart graphically depicts the decline in the number of U.S. workers earning the minimum wage or less, for such professions as waiters, bartenders, etc. who are paid below the federal minimum wage with the expectation they will be earning substantial income in the form of tips. The data presented in the chart is taken from the U.S. Bureau of Labor Statistics (HT: Greg Mankiw): 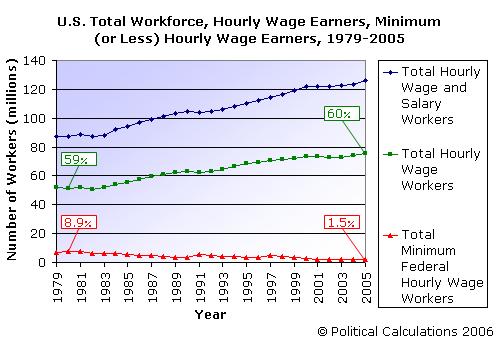 This trend has occurred despite the total percentage of hourly-paid workers remaining fairly constant at roughly 60% of the total number of U.S. workers over the intervening years from 1980 through 2005.