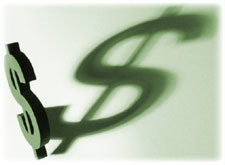 One of the most useful tools for predicting whether or not a publically-traded company might be headed for bankruptcy is the Altman Z-Score. The main advantage of the Altman Z-score is that it takes information easily found in a company's financial statements and uses a simple formula to compute a numeric value that may be used to assess its degree of financial distress.

Originally developed in 1968, the Z-Score was created by Edward Altman of New York University's Stern School of Business, who updated his original work in 2000. This updated work forms the basis for the tool presented below.

The tool below may be used to compute the Altman Z-Score for a publically-traded company found in Manufacturing or in non-financial Non-Manufacturing industries. The necessary financial data for a company of interest may be found using Yahoo! Finance or Google Finance. The default data is taken from General Motors' financial statements for the 3 months ending March 31, 2006.

Is the Company Healthy?

The following table indicates the degree to which a company may be in distress according to its industry:

For investors, a Z-Score that falls in Altman's "Ignorance Zone" shouldn't necessarily be excluded from consideration, but a score in this range does indicate there may be a need to more closely investigate a particular company's situation. Investors may also find it beneficial to determine a company's Z-Score going back over several investing periods in order to establish if a trend exists.

How Accurate Are the Predictions?

For the same samples, the Altman Z-score correctly anticipated 68% to 75% of the bankrupcties and defaults some two years before they occurred.

When Not to Use the Altman Z-Score

The Altman Z-score is most useful in determining the likelihood of bankruptcy occurring in companies found in the Manufacturing and in many Non-Manufacturing industries. Where it doesn't work well is in analyzing financial companies, such as banks or brokerages, or companies with a large financial component in their business, such as General Electric.

A really good article describing the strengths and weaknesses of the Z-Score is available at Investopedia!