Political Calculations
Unexpectedly Intriguing!
08 August 2006
What Are the Odds of a Recession?

Since Barry Ritholtz asked the question yesterday, we here at Political Calculations thought we'd take it on. And why not? We've got the tools - let's use 'em! Better yet, unlike certain alarmist analysts (HT: Arnold Kling) and their deeply partisan "echo chamber," (HT: Mark Thoma) we make them freely available so you can too!

But enough about us and politically-motivated economists. Using the following U.S. Treasury yield data from yesterday's market close (currently available here), and using our 12-month recession odds tool, we found the following probabilities of a recession occurring in the next 12 months for the potential actions the Fed might take at its meeting today (8 Aug 2006):

Just for fun, we'll note that if the Fed followed a Taylor Rule much like Greg Manqiw recently outlined, they would raise the Federal Funds Rate by 0.17% to 5.42%, which would give the U.S. economy the probability of entering into recession in the next 12 months of 40.7%.

The three most-likely outcomes are illustrated in the following chart, which shows the Fed's most recent tightening cycle: 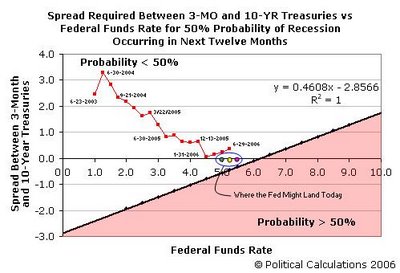 So, what does all this mean? Well, as far as we're concerned, we wouldn't consider a recession to be likely until that 50% threshold is crossed, and even then, we would need to see the probability of recession continue to increase substantially much as it has in preceding other recessions over the past 40 years - unlikely given the amount the yield curve would have to invert at these Federal Funds Rate levels.

Otherwise, we'd be just like all those other overly gloomy prognosticators with highly suspect and really pessimistic economic models, whom we suspect are really seeing things the way that dead people do.

But what else should we expect during an election year?...