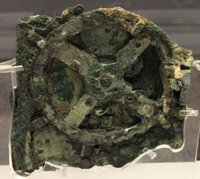 Don't you just hate it when civilization loses something useful for a couple thousand years? The recent confirmation that an artifact recovered from an ancient Roman shipwreck off the island of Antikythera in the Mediterranean over a century ago was actually a highly sophisticated astronomical calculator is just such a case. The device is so sophisticated in fact, that its intricate gearing could be used to perform basic math operations such as addition, subtraction, multiplication and division in addition to showing where the sun and moon would be in the zodiac, and quite possibly the positions of the planets with respect to the constellations of the zodiac as well. 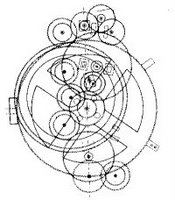 To put the capabilities of this device into perspective, the type of gearing incorporated in this ancient Greek bronze-age tool would have no comparable equivalent until the development of intricate time pieces and clockworks over a millennia later and well into the 1800's for an equivalent level of miniturization and sophistication.

Where the ability to do math is concerned, the development of the difference engine in the late 1700's-early 1800's provides the most relevant example. The ideas behind the invention of this device are the direct forefathers of today's computers. 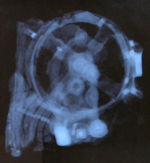 The capabilities of what was perhaps the most advanced device on the face of the planet when it was created more than 2000 years ago are just now coming to light thanks to technology that allows this ancient device to be studied and modeled without risking damage to its internal components. X-ray tomography has helped identify and define the gearing within the device, while modern rapid prototyping technology may be used to create a working version of the mechanism to help confirm its functionality.

It's not the first time that a device from the ancient world has proven to be centuries before its time. It's happened before with the steam engine, the coin-operated vending machine, and the battery, but nothing anywhere as near as sophisticated as the 1st-century BC device now called the "Antikythera Mechanism."