Context. The answer to the question of why we were looking at historic U.S. Treasury bond yields is to gain a better understanding of how likely it would be for the probability of recession to actually occur given the current levels of U.S. Treasuries and the Federal Funds Rate.

It's one thing to take these two bits of information and calculate the probability of recession beginning in the next 12 months, it's another to consider the yield spread in the context of the underlying data used to determine this figure: the difference between the yields of the 10-year and 3-month Treasuries. How likely is it, for example, that the yield of the 10-year note will drop low enough compared to the 3-month bill to increase the probability of recession to 60%? Or 80? Or higher?

So, we took the latest data we had for the 3-month Constant Maturity Treasury (5.05%) and the Federal Funds Rate (5.25%) and said, let's say these were the average levels for these figures for the last quarter. What would the corresponding level of the 10-year Treasury have to be to reach the 60% threshold? Or the 80% threshold? Or a 99% threshold?

Now you know why we created yesterday's tool! We used the data above to find the corresponding spread between the 3-month and 10-year Treasuries and did the addition to find the yield of the 10-year note that would be associated with the other two bits of data. Then, we plotted the history of 10-year Treasury yields going back to January 2, 1962 along with the yields for each of the probability thresholds we considered to see just how often the 10-year note shows up at these levels, which we've presented in the following chart (click the chart for a larger image): 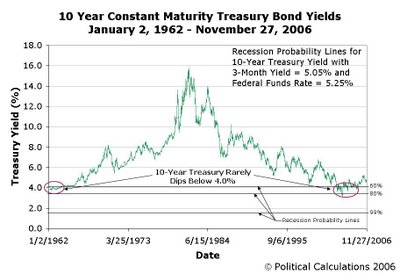 The recession probability lines shown on the chart only apply for the very recent conditions of a Federal Funds Rate of 5.25% and a 3-month Treasury yield of 5.05% (today's assumed conditions) and are shown across the entire span of time on the chart for reference only - they only apply for November 27, 2006.

You can also see in the chart that there's still quite a bit of separation between the current level of the 10-year Treasury and the 60% threshold. On the whole, this data does suggest that it's more unlikely than likely that the 10-year Treasury will drop low enough to truly provide a clear signal that there will be a recession. The data is more consistent with a slowdown in the economy.

We found it interesting that the FRBSF Economic Letter that kicked off our recent bout of recession probability analysis noted that "the single-equation model based on the yield curve and the funds rate appears to have performed better historically than other models, it makes sense to take its pessimistic forecast seriously." But, they caution that this data may not be enough and that "there also are mitigating factors to consider" and point to other forecasts and metrics to make their point that a recession is unlikely.

Given our preferred state of optimism, we're inclined to agree – although we don't know that you have to go very far beyond the underlying data in the Treasury yield curve to get there. Especially if you place it in context!