Well, let's make no bones about it - the Climbing Limo method for forecasting future GDP was wide off the mark for the fourth quarter of 2006! Our chart below shows just how far off the mark it was: 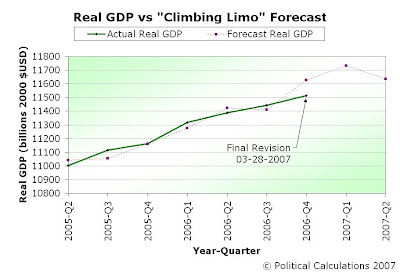 The miss between the forecast and the actual Real GDP figure demonstrates the key weakness of the Climbing Limo method: its forecast values do not incorporate any information about the performance of the U.S. economy less than six months old!

The truth is that economic growth trends change over time and this is evident in looking at the most recent forecast data projected in the same chart above (the dotted line), which shows a substantial change in the growth that had originally been projected from 2006-Q4 through 2007-Q2. In fact, we could have better forecast where Real GDP for the U.S. economy would have come in at if we had simply connected the dots from the last actual Real GDP data available in 2006-Q3 to our most recently forecast data for 2007-Q2.

So, why don't we just go ahead and do that? The following chart shows our results: 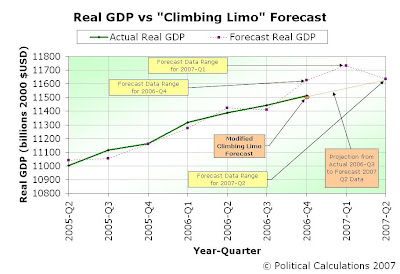 Well, since we really like really small errors between forecast and actual data, let's go ahead and use the final revision of the 2006-Q4 data to forecast the 2007-Q3 Real GDP figure using the standard Climbing Limo method, then apply our modified forecasting technique to bridge the gap: 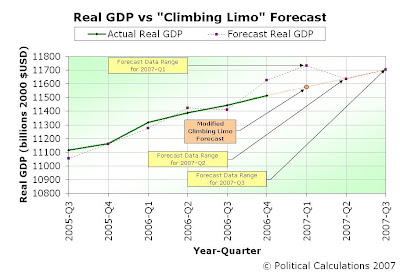 We'll find out at the end of next month if our modified method's got game!