Political Calculations
Unexpectedly Intriguing!
18 April 2007
Are You Too Good for Your Job? 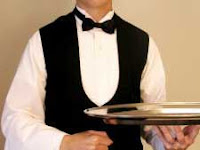 You know you've considered this question! Maybe you have a PhD in the liberal arts, but you're still waiting tables at a restaurant where your co-workers are a bunch of teenagers. Or maybe you're working in your chosen field and you've looked at your co-workers and wondered how you've managed to become surrounded by incompetence. Or maybe you've found that you seem to be doing an awful lot of the things that your boss is supposed to be doing, as well as your own job, but are doing both of them better than your boss ever could.

If you're working in a hierarchical organization (probabably 99%+ of all businesses, although we really have no idea) and you find yourself observing these things, you're very likely running on the underside of the Peter Principle. The idea of the Peter Principle is that over the course of an individual's working career for an organization, they will eventually be promoted to a position that reflects their highest level of competence. Or rather, a position where their incompetence prevents them from being promoted to an even higher level.

Then again, you may just be a whiner and only think you're better than your job (such as having a liberal arts PhD and waiting tables for a living!) How can you know for sure?

We can help you find out. Our latest tool below takes the math developed by Geek Logik

's Garth Sundem. Just enter your data below and we'll do the rest!

In the results above, a Qualification Index score greater than 1 suggests that you are too good for your current job. If you scored less than 1, you might consider playing around with the other data inputs to find where you might cross the threshhold!

Now, to be fair, we picked on liberal arts majors in our commentary above, who are more prone to finding themselves in occupations that are less highly valued than occupations that focus upon creating higher levels of economic benefits for society at large, such as business, medicine or engineering. Garth Sundem suggests some adjustments to consider in your personal calculations depending upon your line of work:

In addition to weighing your intelligence and marketability against your current work situation (including a look at where you are in the company in comparison with where you deserve to be), this equation measures your current job against salary.

However, salary isn't always a direct measure of the job you can expect to find with your talents. For example, an educated director of a nonprofit might make only a fraction the amount of a high-school-dropout-pop-music-star. Thus, if you majored in English, music, fine arts, or environmental science, add $20,000 to your annual income. If you majored in business, pre-med, pre-law, or engineering, subtract $20,000).

If it helps assess the relative value of your intelligence, education and/or profession, here are our previous posts on Ranking School Smarts by Major and High Investment, Low Payoff Careers.