Some things just demand a picture to illustrate. The Tax Foundation's recent computation of the change in progressivity of U.S. income taxes from 2000 to 2005 is one of them: 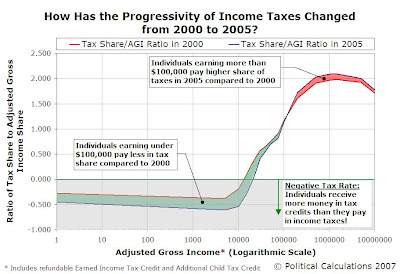 The data presented in the chart above includes the contributions of the refundable portions of the Earned Income Tax Credit and the Additional Child Tax Credit. These factors, along with lower tax rates, are a large reason why the tax share decreased substantially for those making less than $25,000 in 2005, as the average tax share for those at these adjusted gross incomes moved to where they receive substantially more in tax credits than they pay in income taxes.

We'll observe that our estimate of the poverty threshold for a married couple with two children in 2005 is $19,723, less than the crossover to positive taxation levels of just over $25,000 for that year.

The chart visually confirms Gerald Prante's observation "that the amount of progressivity within the federal individual income tax system increased from 2000 to 2005, even though income inequality increased slightly."