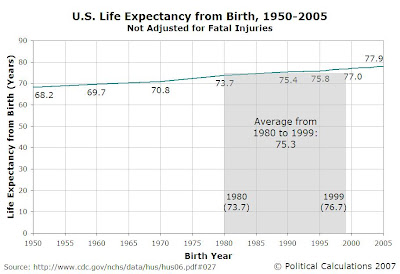 Reuters goes on to say that the death rates from the top three natural causes of death in the United States, heart disease, cancer and stroke, all decreased in 2005 compared to the previous year, helping to contribute to the increase in U.S. life expectancy. What the Reuters article doesn't tell us is something we find more interesting. Here, what they don't tell us is that the CDC's life expectancy figures also incorporate non-natural causes of death, such as those resulting from fatal injuries, which include motor vehicle accidents, falls, accidental poisonings, homicides, et cetera.

This is important because these factors represent the leading causes of premature death in the United States for all ages up through 44 years old. Premature deaths caused by these non-natural factors result in a lower life expectancy figure for the U.S., which gives a somewhat misleading picture of the general health of U.S. individuals.

What makes this relevant is that the Reuters article also had this to say:

The United States, a country of 300 million people, ranks 42nd in the world in life expectancy, according to previously released data.

This low ranking in life expectancy is often pointed to as being the result of the deficiencies of the health care system in the U.S. The problem with this thinking however is that it does not account for the fact that the U.S. has a disproportionate number of individuals who die as the result of fatal injuries compared to the other wealthy nations of the world. This does not reflect upon the quality of health care in the U.S., in that these events almost universally occur independently of the condition of health of the individuals who die as a result of these factors.

Two University of Iowa researchers, Robert L. Ohsfeldt and John E. Schneider, reviewed the data for the nations of the OECD to statistically account for the incidence of fatal injuries for the member countries. The dynamic table below presents their findings, showing both the average life expectancy from birth over the years 1980 to 1999 without any adjustment (the actual "raw" mean), and again after accounting for the effects of premature death resulting from a non-health-related fatal injury (the standardized mean). You may sort the data in the dynamic table from low to high value by clicking on the column headings, or from high to low value by clicking a second time.

If you've sorted the data in the dynamic table, you find that without accounting for the incidence of fatal injuries, the United States ties for 14th of the 16 nations listed. But once fatal injuries are taken into account, U.S. "natural" life expectancy from birth ranks first among the richest nations of the world.

Our tool can help you estimate how many more years you can statistically look forward to! Plus, we link to other tools that let you account for the things that can affect your health.

We broke apart the United States to better describe the relationship between health care spending and national economic output.

We took on the scourge of malaria with a tool based on math that can help better target malaria control efforts.

The Cost of Risk vs. Benefit

When is it worth taking a medical test for which there's little chance that you'll benefit? Our tool can help you answer the question - plus the same math applies if you're looking to play the lottery!

u.K.-based researchers have proposed an excise tax for food they deem unhealthy. We run the numbers to find out how much money U.K. taxpayers would have to shell out and also find out how much it will cost to delay one obesity-related death by one year!

What happens when a national health care bureaucracy gets to define what constitutes medical necessity? We tell the story of an elderly woman with cataracts....

Should You Go To the Doctor?

Our very much tongue-in-cheek tool can help you decide if you should seek medical treatment for that embarrassing condition of yours!