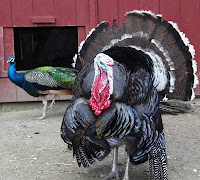 Before we begin, we're going to flat out admit that all the analysis in our traditional Thanksgiving Week annual report on the state of the U.S. Turkey Industry is at least a year out of date, but what do you expect when we only analyze the economics of turkeys once a year? And we should also note that 2007 isn't over yet!

Previously, we've dug into the nefarious world of the U.S. Turkey-Industrial complex, a shady place that saw turkey production plunge in 2005 and that is having a harder time making a buck in recent years. Beyond that, we also uncovered the real seamy underbelly of U.S. turkey production, where massive amounts of agricultural R&D are being put into what we choose to call the "Super Turkey" project!

The fortunes of the U.S. turkey industry would seem to be on a rebound, at least as of last year. Our first chart shows the bounce back from the deep plunge U.S. turkey production took in 2005: 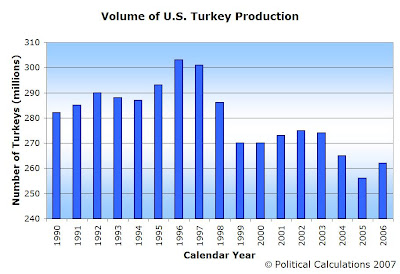 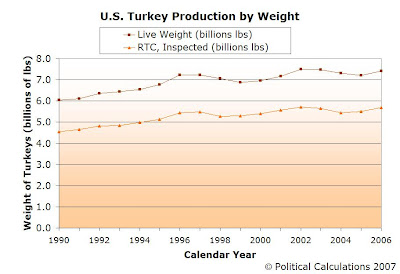 Now that we know how many turkeys were produced in 2006 and how much they collectively weighed, we can now determine how successful the super-secret Super-Turkey project has been in achieving its goal: a single turkey weighing over 7.4 billion pounds that would be capable of fulfilling all U.S. consumption needs for an entire year. The results of our calculations are shown in the next chart: 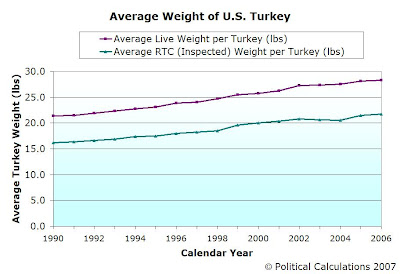 The live turkeys of 2006 weighed in at an average of 28.31 pounds each, up just 0.16 pounds from the average 28.15 pounds per bird in 2005. This represents the smallest annual increase since 2002's 0.07 pound increase from the previous year and is down substantially from 2005's year-over-year 0.56 pound increase. This suggests that progress on the Super-Turkey project may be stalling out as U.S. turkey producers focused on producing more birds in 2006 rather than bigger ones.

And even though they focused on producing more birds, with the RTC-Inspected weight of the average bird in 2006 coming in at 21.70 pounds, up 0.20 pounds from 2005's average of 21.50 pounds per bird, these figures once again indicate that U.S. turkey producers are continuing to achieve higher and higher yields.