*The* Craig Newmark believes that deficit spending is a phony issue and concludes his well-considered argument by saying:

I believe politicians, journalists, and the public should pay attention to specific spending and taxing proposals and to the total amount of government spending, rather than commentating and thinking almost uselessly about the deficit and the debt.

Why they don’t is a question for political scientists or, maybe, sociologists.

Here's a little different way to look at why they do go on so much about the deficit and national debt. The growth of the national debt in recent years doesn't just track GDP growth, it would also appear to track U.S. population growth as well. We can see this if we factor population into the debt-to-income ratio.

What this shows us is that over time, the primary driver of increases in the national debt is real national crisis - in the chart from the link above showing the Debt per Capita to Income index (DTIP) from 1900 to 2005, we see the largest upward spikes coinciding with World War I, the Great Depression, and especially World War II. Outside these events, we see that the index has tended to hang around an index value of 2. Right now, I believe it's about halfway between 2.1 and 2.2 - pretty much on par with where it's been since 2000, and lower than where it was for much of the 1990s. This pattern goes back much further. Believe it or not, the Civil War spike is nearly identical in magnitude to World War II, but took a lot longer to come down: 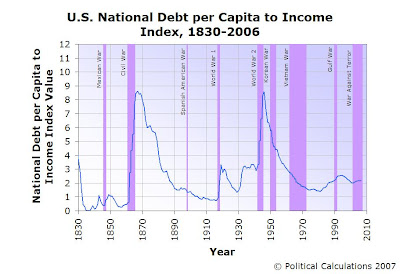 We selected this version of our data to display since it best shows the comparison between the Civil War and World War II. Beginning in 1830, the chart above cuts out the much larger impact of the War of 1812 and also the even larger magnitude of the Revolutionary War.

Now, here's where this matters. Outside national crisis, what paces government spending is both economic growth, which drives government revenue, and population growth, which largely drives government spending. While there's nothing that says that the government couldn't maintain the level of debt at a lower level with respect to these figures (say at a DTIP of 1.0 instead of 2.0), maintaining a higher level with wasteful spending would act to help insulate elected officials from the impact of having to raise debt at a rate faster than population and economic growth or taxes to have to deal with lesser national crises.

For lower-level crises, this higher level of debt would allow wasteful spending to be reallocated without having to increase taxes. Or taking on massive amounts of new debt. And, as a bonus in the absence of such crises, politicians can use the excess available funds to support their re-election efforts by rewarding their campaign contributors or buying votes through pork barrel projects in their districts.

The downside is that when a lower-level crisis hits the national stage, a lot of politicians resent having to deal with it since it prevents them from fully pursuing their preferred venues for wasteful spending. Especially if they might otherwise have a physical structure named after themselves or get credit for some 'improvement.' And this is why we hear about deficits so often.