We're going to be unveiling the most remarkable stock market-related chart ever tomorrow, but as part of the build up to what we're going to present, we thought it might be useful to consider the history of dividends for the S&P 500 and its precursor composite indices since 1871. The following charts are all drawn from our data, spanning January 1871 through November 2007.

First up, our very basic look at the S&P 500's average monthly dividends per share, not adjusted for inflation, over the entire history covered by our data: 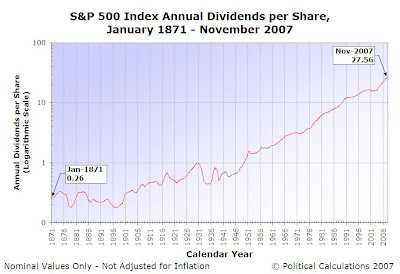 Next, we'll look at the S&P 500's dividend yield, in which the index' dividends per share are divided by the index' price per share and expressed as a percentage, throughout this same period: 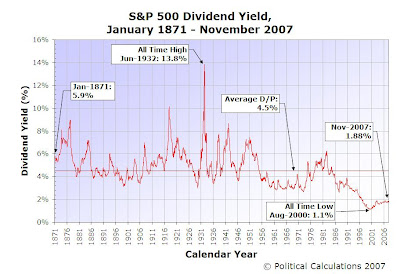 Our next chart considers the relationship between the S&P 500's dividends and earnings. As we recently discussed, dividends are the portion of company earnings that the company's leadership believe to be sustainable for the foreseeable future. We've expressed this relationship as the percentage of the S&P 500's rolling annual dividends per share and the rolling annual earnings per share in the chart below: 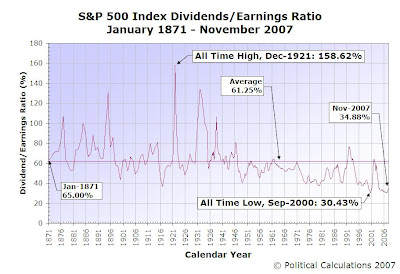 As with our dividend yield chart, we note that prior to January 1952, the S&P 500's dividend-earnings ratio was typically above it's long term average of 61.25%, while it has been typically below this level ever since.

There is, in effect, a division between the general level of dividends per share that occurs in this time frame. The following chart illustrates the major periods of the S&P 500's dividends: 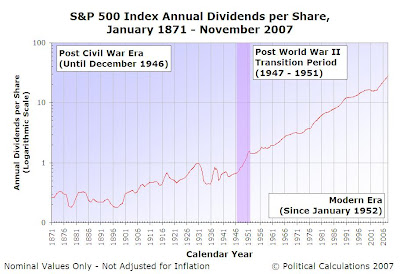 We find that there is a major transition between the typical level of S&P 500 dividends that coincides with the period from January 1947 through December 1951. Prior to this transition, the typical growth rate of S&P 500 dividends per share grew at a annualized growth rate of 1.74%, with a considerable amount of volatility (the chart below presents this growth on a logarithmic scale): 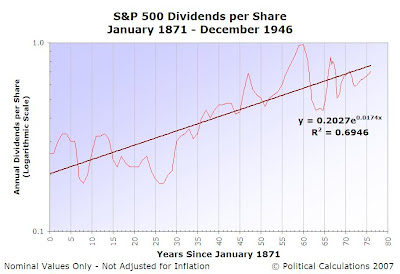 Since January 1952, the growth rate of the S&P 500's dividends per share has been much less volatile, and also much larger, clocking in at an average annual rate of growth of 5.38% (also shown on a logarithmic scale): 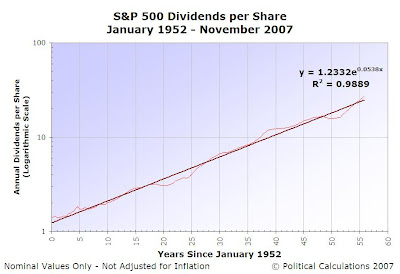 We believe this apparent transition in average annual dividend growth rates might be explained by one of the three possible scenarios:

Our gut feeling is that the first scenario is the correct one, but we can't rule out the second, primarily due to what appears to us to be unusual confluences in the dates involved. We suspect it's a coincidence, but we don't know enough about how the S&P 500 evolved in this period to authoritatively confirm if that is the case.

But then, that's what the blogosphere is for! Anyone?