Because we're tied up doing other projects at the moment, we thought it might be fun to take a moment to consider just what the heck the Federal Reserve is doing lately.

When we last peered into the Fed's inner sanctums, where the members of the Fed's Open Market Committee meet to discuss monetary policy and perform ritual sacrifices (latest victim: Bear Stearns), we noted that the Fed was starting to really crank up the supply of money in the U.S. economy by setting the target federal funds rate well below where recent data would suggest it should be.

We know this, in part, because of the genius of N. Gregory Mankiw, who developed an alternative Taylor-rule type method for anticipating where the federal funds rate target might be set back in the 1990s, which we realized could provide an independent framework against which we could assess the most recent actions of the Fed.

Here's an example of what we mean - here's our newly created, most recent predicted vs. actual Federal Funds Rate Chart which provides data through February 2008: 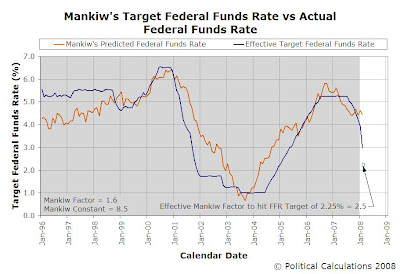 What makes the chart interesting are those times when the dark blue line of the actual plunges well below where the purely backward-looking data driven Mankiw method would place it. This change would seem to coincide with the situation in which the Fed is racing to keep ahead of an economic plunge by sharply increasing the supply of money in the U.S. economy. We last saw this in early 2001, and we see it again today.

Measured against the framework developed by Mankiw, we can account for this change by altering what we call "the Mankiw factor," which can be thought of as the Fed's dial setting for controlling the flow of money into the U.S. economy. From January 1999 through December 2007, the Mankiw factor had an average value of 1.6. Generally speaking, the Fed is increasing the money supply when the dark blue line is below the predicted value illustrated by the orange line, and is decreasing the money supply when the blue line is above the orange line. When the lines overlap one another, it indicates that the Fed's policy is fairly neutral (if we take a Mankiw factor value of 1.6 as representing the Fed's desired balance.)

Then, beginning in January 2008, the Fed's repeated slashing of the federal funds rate confirms that it isn't business as usual any more. Taking into account the third rate cut this year that lowered the FFR to 2.25%, we now find the Mankiw Factor would have to increase to 2.47 to be justified by the rates of inflation and unemployment through February 2008, which tells us that the Fed has seriously turned the knob well past the monetary policy equivalent of eleven.

And that's where we are today. Otherwise, to get to a Federal Funds Rate of 2.25% under the typical conditions that have existed since 1999 (represented by a Mankiw factor of 1.6), either the rate of inflation, less food and energy, would need to decrease to 0.9% from February's 2.27% (holding the rate of unemployment steady) or the rate of unemployment would need to increase to 6.2% from February's 4.8% (holding inflation steady.) Or some combination of lower inflation and higher unemployment would justify that level as well.

It's finding the right balance between the two that makes the Fed's job so tough!