The economic books on 2007 closed today, with the U.S. Bureau of Economic Analysis' final release of GDP data for the fourth quarter of 2007. There was very little change from the advance and preliminary estimates, as all came right around 0.6% for an annualized rate growth over a one-quarter period and 2.7% for an annualized rate of growth over a two-quarter period, so we'll go straight to our GDP bullet charts: 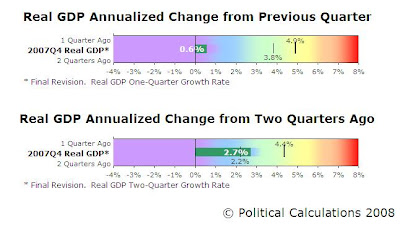 The top GDP bullet chart above shows the annualized growth rates that you'll see in most mainstream media reports, which only considers the rate of economic growth over a one-quarter period, for which the chart depicts the results for the three most recent periods. The bottom GDP bullet chart goes a step further, showing the rates of GDP growth over a two-quarter period of time for the three most recently ended quarters, and therefore, effectively covers the entire past year.

On both charts, these individual data points are illustrated against the backdrop of what's been typical of economic growth in the U.S. since 1980, in the form of the temperature color scale. We can see that on the one-quarter bullet chart, that the fourth quarter of 2007 dipped into the cold end of the chart, while the two-quarter rate of growth falls between the cool (blue) and moderate (green) growth range.

The two-quarter data is especially important as it provides the means by which we can project where GDP will be in the future. The next chart shows our projections using both the Climbing Limo method developed by the Skeptical Optimist, which looks three quarters ahead in time, and our tweaked Modified Limo technique, which only looks ahead toward the next quarter: 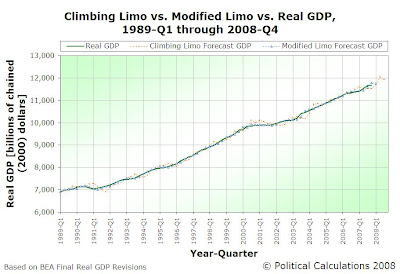 With Real GDP coming in at $11,675.7 billion in Year 2000 dollars for the fourth quarter of 2007, we would anticipate that Real GDP for the first quarter of 2008 would come in at the following levels for each of our various forecasting methods:

The data used to create the 2008-Q3 Climbing Limo projection for the Modified Limo technique are the Real GDP figures for 2007-Q2 and 2007-Q4.

Going back to our GDP forecast chart, we note that we see a sharp decline in what the Climbing Limo method would project from 2008-Q2 to 2008-Q3. This effect is driven by a sharp change in recorded GDP levels from previous quarters, which in turn tells us that the one-quarter projection, which we obtain simply by extending the performance of the most recent quarter-over-quarter period one quarter ahead, is likely to be the closest to what the actual figure will be that we should also expect that it will come in below this value.

It might not be a recession, but there's no denying that economic growth in the U.S. is dragging.