We've long provided the Recession Probability Track as a sidebar feature, which visualizes the probability of recession as might be found from using our tool for Reckoning the Risk of Recession, which in turn is based upon a method developed by Jonathan Wright. That method uses the data obtained by averaging the effective Federal Funds Fate and the spread between the 10 Year and 3 Month U.S. Constant Maturity Treasuries to anticipate what the probability of recession will be one year ahead in time.

But we had no idea that the method would also anticipate to the day when CNBC financial commentator Larry Kudlow would make the call that a recession has begun on CNBC's Squawkbox, as he did on Friday, 4 April 2008!

We're going to deviate from using our usual Recession Probability Track, which shows the rolling one-quarter average of the Federal Funds Rate against one-quarter average spread between the 10 Year and 3 Month U.S. Constant Maturity Treasuries, and instead just show the calculated probability against time, first for the dates when the indicated probabilities were first calculated: 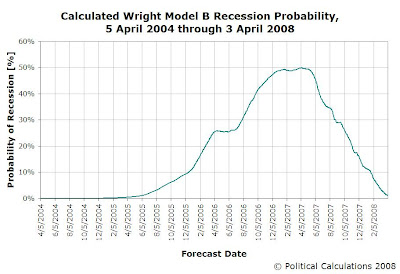 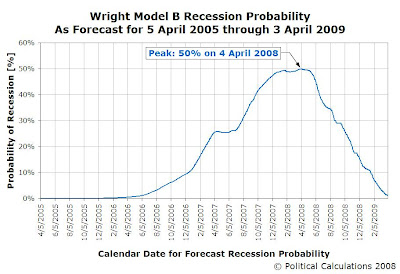 And there it is! The probability of recession peaked at the critical 50% level right on 4 April 2008, the same date that Larry Kudlow crossed the recession line as well!

Now, if you go by the chart above, we can expect the "Will there be a recession?" fever to continue on for about a month more, then fade rapidly as it will be replaced by the "oh my gosh, this is the worst recession ever and it will never ever end" type thing that we can expect from the media in an election year where the incumbent party of the U.S. presidency is Republican.

We only point this out as the media only talks the economy up in years where the incumbent party of the U.S. presidency is Democrat.

Meanwhile, a good number of jobs will be lost and the unemployment rate will rise and the most impacted group will be those of high school or college age, who will find their job opportunities have dried up the most. This result will be most due to the lower level of education and work experience of those in this group, but also because this group makes up the majority of those who earn the minimum wage in the United States (as a result of their having low levels of education and work experience.)

Since the minimum wage across the United States has been increasing, with a number of state's increasing their minimum wages effective in January 2008, and is scheduled to increase at the federal level in July 2008, we can expect the U.S. unemployment rate to peak for the year in November or December, given the roughly six month lag between when a minimum wage increase takes effect to when jobs or hours are cut back.

Most jobs so affected will be entry level positions at the small business level. Nationally, these individuals of ages 15 through 24 will account for the vast majority of the ranks of the unemployed.

Unfortunately, one of the major political parties in the United States is firmly opposed to doing anything that might lower the rate of unemployment this year, especially for young people. At least, until after the election. Maybe.