Political Calculations
Unexpectedly Intriguing!
April 15, 2008
Because They Make the Most Money

We asked this question yesterday when we took a closer look at the changes in tax rates between 1954 and 2006, finding that the people represented by this income range saw just a 4% reduction in their marginal tax rates, while virtually all income earners saw at least double-digit tax rate percentage reductions. These other percentage reductions in marginal tax rates from 1954 to 2006 ranged from 17% to 50% over the adjusted gross income spectrum covering $0 through $100,000 for households in inflation-adjusted, constant 2006 U.S. dollars.

As we'll show you next, and as our post title states, the reason the people and households who fall within this income range have never had their tax rates lowered very much in the U.S. is because they earn more income than any other group in the U.S. Those individual and household personal income tax filers within this $30-$45,000 range also provide the most stable source of tax collections for the U.S. government from personal income taxes, upon which the U.S. government relies to fund its massive levels of spending.

From there, we took the inflation-adjusted adjusted gross income data and the accumulative number of tax returns filed in 2005 and used ZunZun's 2-D function finder to fit a curve to the data.

We selected the second-ranked option provided by ZunZun's results, as it represented an ideal combination of low error and a minimal number of factors, which was given by the NIST MGH09 distribution:

where "x" is given by adjusted gross income.

To get the distribution of income, we next used this equation and the fitted coefficients given by ZunZun to find the approximate number of returns for each $100 adjusted gross income interval between $0 and $100,000. This number is given by the difference between the values obtained by solving our distribution equation at the high end of the income interval and the low end. The results are provided in the chart below: 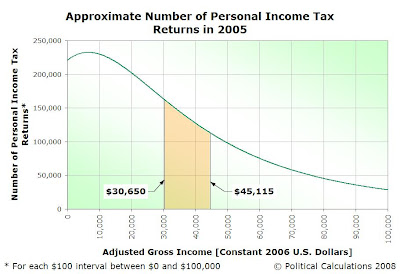 We next approximated the accumulated adjusted gross income earned for each $100 interval represented by this distribution of personal income tax returns (for both individuals and households). We did this using a quick-and-dirty technique that involves simply multiplying the mid-range of the $100 interval by the approximate number of returns filed given for the interval by the distribution. The following chart shows our results: 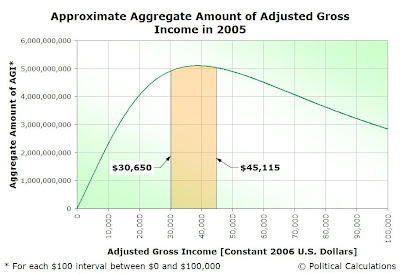 The aggregate amount of Adjusted Gross Income (AGI) in the chart above is provided in 2006 U.S. dollars.

And so, we confirm using our back-of-the-envelope analysis that those individuals and households filing personal income tax returns in the income range of $30,650 to $45,115 do, in fact, earn the highest amount of income, which accounts for why these people have never had their marginal tax rates significantly lowered.

As a result, the U.S. government seeks to capitalize on the stability provided by those individuals and households within the $30-$45,000 income range and maximize its personal income tax collections by sustaining the highest marginal tax rates possible.

And that's why the government hates people earning between $30,650 and $45,000 (in constant 2006 U.S. dollars), as demonstrated by its unwillingness to provide those falling within this income range with significant tax rate cuts.

Have a happy Tax Day!