With the NCAA final four just two days away, and the personal income tax filing deadline now less than two weeks away, we thought it might be fun to return to a supposedly simpler time, by looking at the most complex array of income tax brackets ever designed by a U.S. Congress: 1954.

Did we say simpler time? Here's our chart illustrating what income tax rate you could expect to pay if you were alive and earning an income in those long ago days of yesteryear: 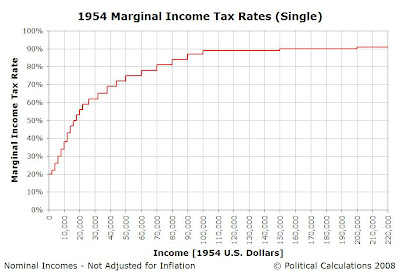 The rates in the chart above apply for a single, unmarried individual, and begin with having their income taxed at a rate of 20% for the first $2000 of income. From there, this marvel of progressive taxation theory grows upward in some 24 steps, or distinct income tax brackets, until it reaches a maximum rate of 91% for those earning incomes of $200,000 or more.

But, those are 1954 U.S. dollars! In our next chart, we've adjusted the multiple income levels for inflation to be in 2006 U.S. dollars: 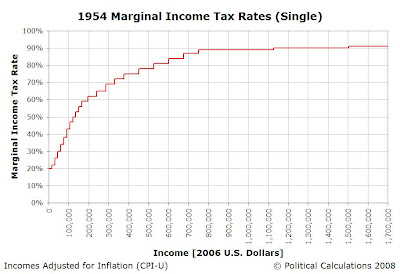 The problem with having a progressive's dream tax code like this, which we suspect that today's most "progressive" politicians would drool over, is that it provides extremely powerful disincentives to do things to earn an honest income, as it came to be realized. What's the point of working harder or being more productive if you can never realize a proportional benefit for your work? Or if you do, and you're smart, why not manipulate the system in ways that avoid your having to pay these kinds of taxes so you can have your cake and eat it too?

No wonder JFK was such a supply-sider!:

"Our true choice is not between tax reduction, on the one hand, and the avoidance of large Federal deficits on the other. It is increasingly clear that, no matter what party is in power, so long as our national security needs keep rising, an economy hampered by restrictive tax rates will never produce enough revenue to balance the budget - just as it will never produce enough jobs or enough profits.

"In short, it is a paradoxical truth that tax rates are too high today and tax revenues are too low - and the soundest way to raise revenues in the long run is to cut rates now."