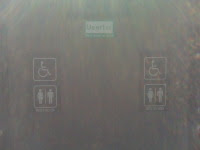 Did anyone else notice an odd convergence last week? Namely, that both Marginal Revolution's Tyler Cowen and Env-Econ's Tim Haab were both in Arizona. At the same time. Yet no-one has ever seen them together. Hmmm..... Could "Tim Haab" just be another one of Tyler's multiple personalities? One that he uses to exploit his extraordinarily high levels of productivity by collecting an extra paycheck and superior student surveys from OSU? Perhaps someone could check Tyler's digital camera to see if he has recently photographed a restroom door at the Grand Canyon to see if they really are, in fact, the same person....

We've been turning this next puzzle over in our heads for a while. Mike Moffatt has enlisted Ian Ayres' stickK.com to incent himself to lose weight (details here). Now, by publicly stating his goals and by attaching a substantial monetary penalty to failing to achieve them, Mike has created a powerful incentive to do what it takes to reach his goals. The puzzle is: "how can we erase the effects of this incentive?" or rather, "how can we incent Mike to fail instead?"

These are tricky questions to answer, and not being game theorists, we were out of our element. So, we went to the Secret Economists Club for assistance. That turned out to be a mistake - first, the Secret Economists Club is made up of economists who are using their knowledge to become filthy rich and take over the world. So they had no time for us. Plus, all they would talk about is TANFs and TSLFs like they know what they mean. Oh, and did we mention that they're a really boring group on top of that too?

So we ended up at the Secret Economists Other Club. This is a much more interesting group of people. Unlike the stuffy Secret Economists Club, where Robert's Rules of Order apply, this group operates under Hayek's Rules of Spontaneously Emerging Order, which are pretty similar to the rules of Fight Club.

As it happens, an ad-hoc group had already been formed to tackle the problem, calling themselves the Anti Mike Moffatt Organization, or AMMO for short. They had picked up on an idea by Aaron Schiff that the way to break the stickK.com incentive was to provide a counter-incentive in the form of insurance that would cover the cost of Mike failing to achieve one of his stated goals.

Now here's where it gets interesting. The way to incent Mike to fail is to get people to bet that he will successful. Here's how this would work - since Mike has such an apparently strong motivation to achieve his goals, betting on his success in a prediction market would seem to be an easy way for a lot of people to win a little bit of easy money, albeit at pretty low odds.

But, Mike has asymmetric knowledge - he knows more about his status than do the people who would bet on his success in the prediction market. He can determine, at any time, either how close or how far he is from achieving one of his benchmark goals. If the odds revealed by the prediction market distinctly favor his achieving a benchmark goal, he could stand to collect a substantial amount by betting against himself using his superior knowledge, and potentially win enough to fully cover his stickK.com commitment and any other costs he might need to cover, as well as maybe picking up a little extra cash as profit.

So the question now is: which one of these potential beneficiaries of Mike's failure to achieve his stated goals will be the first to set up the prediction market?