Political Calculations
Unexpectedly Intriguing!
April 21, 2008
Why Does Social Security Have a Cap?

It's often cited that the U.S. Social Security program's originators intended set the maximum taxable wage base to limit the amount of benefits that those earning more than this amount might receive. The Heritage Foundation's Rea S.Hederman, Jr, Tracy L. Foertsch and Kirk A. Johnson make this point in looking at the potential negative impact upon removing the income cap back in 2005 (emphasis ours):

Social Security was created as a pay-related retirement system, not as a welfare program that redistributes money from workers to those in need regardless of whether or not its recipients had paid into the system. The benefits that retirees received were linked to the taxes that they had paid when in the workforce. Social Security was intended to supplement rather than replace private sources of retirement income by providing only a basic, government-guaranteed source of income.

Maximum Level of Benefits and Maximum Taxable Wages. Within this context, Congress determined that it was appropriate to set an upper limit on the amount of income that Americans could receive from the Social Security program. A limit on benefits, combined with the principle that workers' benefits should relate to the amount of money that they paid into the system, made an upper limit on the taxes that workers would pay appropriate.

However, this explanation of why the Social Security tax cap exists falls short in our view. As amended in 1939 prior to making its first monthly payments, the program would pay out in benefits each year the amount that the program had collected through dedicated payroll taxes each year in a "pay-as-you-go" system. Why bother limiting the payouts for those who had paid the most? Why limit the taxes paid to support the Social Security program?

We find that the real answer perhaps lies in the economic environment of the Great Depression and the experience the government had obtained in collecting income taxes, after the 16th amendment to the U.S. Constitution permitted the federal government to impose them.

After taking effect in 1913, the federal income tax soon proved to be a highly effective means of providing funding for the U.S. federal government. In fact, the new income tax was so successful that it more than compensated for the tax collections lost when the government enacted the 18th amendment to the U.S. Constitution, which prohibited the sale of alcohol in the United States, which took effect in 1920.

So successful, in fact, that the new national income tax may have enabled the ability of the government to enact Prohibition in the U.S., as Don Boudreaux has argued:

Prior to the creation in 1913 of the national income tax, about a third of Uncle Sam's annual revenue came from liquor taxes. (The bulk of Uncle Sam's revenues came from customs duties.) Not so after 1913. Especially after the income tax surprised politicians during World War I with its incredible ability to rake in tax revenue, the importance of liquor taxation fell precipitously.

By 1920, the income tax supplied two-thirds of Uncle Sam's revenues and nine times more revenue than was then supplied by liquor taxes and customs duties combined. In research that I did with University of Michigan law professor Adam Pritchard, we found that bulging income-tax revenues made it possible for Congress finally to give in to the decades-old movement for alcohol prohibition.

Before the income tax, Congress effectively ignored such calls because to prohibit alcohol sales then would have hit Congress hard in the place it guards most zealously: its purse. But once a new and much more intoxicating source of revenue was discovered, the cost to politicians of pandering to the puritans and other anti-liquor lobbies dramatically fell.

But that boom in revenues all came before the years of the Great Depression. Don Boudreaux describes the environment that motivated the repeal of Prohibition:

Despite pleas throughout the 1920s by journalist H.L. Mencken and a tiny handful of other sensible people to end Prohibition, Congress gave no hint that it would repeal this folly. Prohibition appeared to be here to stay -- until income-tax revenues nose-dived in the early 1930s.

With no end of the Depression in sight, Washington got anxious for a substitute source of revenue.

That source was liquor sales.

While the federal government turned to taxing liquor sales once more to support its basic operations, the originators of Social Security could not help but be aware of the issue of funding the program, upon which recipients would become partially dependent in supporting themselves, using a new tax on individual incomes. How would they escape the volatility inherent in income tax collections from year to year? 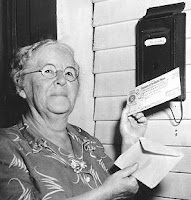 The only way to guarantee that the Social Security program would be able to meet its promised obligations to its beneficiaries would be to remove the element of extreme volatility from its income tax dependent revenue source. And the only way to do that would be to set a statutory limit on the amount of income that could be taxed, and set that limit well below the income levels that were the most volatile from year to year: those of the highest income earners.

With this cap on the amount of income that could be taxed in place and the amount of benefits that it would pay out linked to it, Social Security would be capable of weathering the extreme storms in the U.S. economy and ensure that beneficiaries would always receive the level of benefits they had been promised.

That's why Social Security limits the amount of income that can be taxed to support the program. Tomorrow, we'll show you why that cap still makes sense today.