After reflecting upon a new study showing higher obesity and poorer health outcomes for low income earners in areas without neighborhood grocery stores, the fine folks over at Freakonomics asked:

But what's driving grocery stores to close their doors?

Glad you asked! In a nutshell, the combination of low profit margins in areas with high rents. 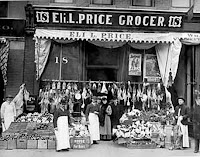 Grocery stores generate notoriously low profits (the net profit margin for grocery stores is just 1.7%) and, as a result, must turn over large quantities of food inventory to make a sufficient income to justify staying in a given location.

That's harder to do in cities, where things like local licensing requirements and other regulations strongly contribute to not just the cost of doing business, but also inflate the cost of property. Combined with the interests of politically connected incumbent businesses and labor groups, new grocery stores are prevented from entering even blighted areas while existing neighborhood grocery stores cannot expand enough to sustain an adequate profit margin that would allow them to survive.

After a point, it makes more sense for the owners of the neighborhood supermarkets to go out of business and sell their property to some other business that can generate a higher profit margin. Like convenience stores. And so the poor get fatter and less healthy.