Not long ago, we asked if it were possible to have an economic recession without ever having the GDP growth rate drop into negative territory.

The current quarter comes in at higher levels, with a one-quarter growth rate of 1.9% and a two-quarter growth rate of 1.4%. This is consistent with a slowly growing economy. We also see this reflected in our bullet chart, as these growth rates fall into the "cool blue" portion of our economic growth "temperature spectrum." The temperature spectrum itself is based upon typical U.S. economic performance since 1980, which provides a means of visually comparing recent GDP growth against its historic performance in the modern era.

All in all, today's data revisions confirm what we already knew: the U.S. economy significantly slowed down in the last quarter of 2007 and has been slowly improving since. Once again, we're amazed at how well this performance has tracked Jonathan Wright's recession prediction model: 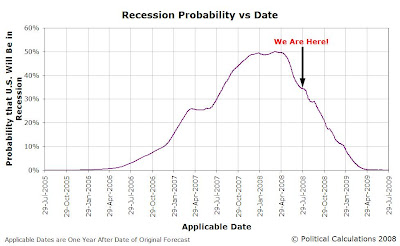 Finally, we can also confirm that First Trust's Brian Wesbury's optimistic forecast for 2008Q2 was very likely too optimistic. As we've seen from today's GDP revisions, the data may change.