Political Calculations
Unexpectedly Intriguing!
July 2, 2008
Why Does Everything Cost So Much More Today?

Or more specifically, why do so many commodities cost so much more than they did in 2004?

Let's start with the commodity at the top of everyone's list these days: energy.

On Monday, we demonstrated that individual Americans aren't the problem when it comes to oil, as the amount of all things made from oil supplied to individual U.S. residents has been fairly level over the past 26 years. That suggests that the increase in the amount of oil supplied to U.S. residents over that time is paced solely by population growth - individual Americans are themselves not consuming ever increasing amounts of oil.

But if you wanted to point your finger in one direction to blame just one party as to why oil prices are so high today, may we suggest you point it at China first.... 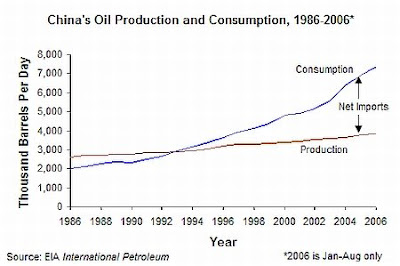 This chart, which we borrowed from Hawkeye at View from Above, reveals how China's increasing demand for oil has outstripped their ability to produce it since 1992. While the chart only extends through part of 2006, it reveals how China has turned to the world to quite literally fuel its economic growth.

Of course, that's just oil. Let's talk coal, which has historically been China's primary carbon-based fuel. Timothy B. Hurst previewed the following tidbit from the U.S. Energy Information Agency in looking at the future of world energy consumption through 2030 (emphasis ours):

Coal's share of world energy use has increased sharply over the past few years, largely because of strong increases in coal use in China, which has nearly doubled since 2000 and is poised to increase strongly in the future. China alone accounts for 71 percent of the increase in world coal consumption in the IEO2008 reference case.

But wait, that's not all! China's been on one heck of a building tear, which means that Chinese consumption is the primary factor driving up the price of building materials. Like cement. The following chart comparing Chinese cement consumption compared to other countries from 2004 through 2007 was created by Paul Kedrosky of Infectious Greed (HT: Trader Mark): 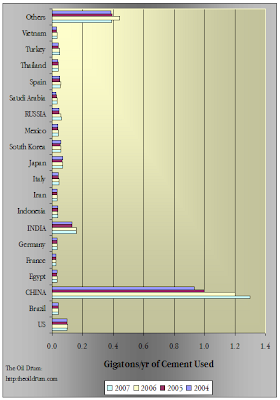 Yes, those are gigatons (billions of tons) per year!

While we're at it, let's also consider metal ores, meat, food, and anything else that might be considered to be a commodity. Deutsch Bank Research issued a report in 2006 looking at the trends in what commodities China was seeking to import, building models to project into the future. While you should follow the link above to see the charts, here's what they had to say in a nutshell (emphasis ours):

To gauge China’s future demand for commodities we have built a simple forecasting model (see box). Our results for crude oil, copper, iron ore, manganese, soy, wood and meat show that although Chinese import demand growth rates have peaked or are likely to peak soon, they will nevertheless remain in lower double-digit territory over the next decade for all commodities except for soy. In absolute terms, these growth rates translate into staggering increases in import demand quantities for these commodities.

A number of economists have been debating whether or not speculation is at the root of today's higher commodity prices. Here's Arnold Kling summarizing the arguments:

Hamilton, Krugman, Cowen and I seem to agree that speculators took the wrong view of oil markets early in 2007. Implicitly, then, we agree that oil prices today depend on expectations for the future. However, Hamilton talks more about the near-term future--the outlook for recession and near-term production. Krugman talks longer term (Saudi exhaustion, Russian oil not appearing), and I talk infinite horizon.

We agree that trying to reduce oil demand by getting rid of speculators is foolish. Knowing what we know now, we seem to think that the price of oil is close to where it belongs, although events could change that.

Krugman and Hamilton want to account for the excess oil that should appear as the price shoots up from $60 to $130+ per barrel. Krugman says that the fact that it does not show up in above-ground inventories is a sign that speculation is not at work. Cowen and I say that the excess oil might be underground, although I have to do a lot of hand-waving and fall back on the fudge factor of "convenience yield," given that futures prices are not far above spot prices.

Hamilton says, eloquently, that "China already burned" the excess oil. That probably ought to go down as the definitive assessment.

We should not forget Mark Thoma's point that other commodity prices also have risen. Maybe China burned some of those too, but Thoma's question still troubles me.

Hopefully, this post helps show that yes, China has burned all those other commodities too. We can therefore expect that high commodity prices will continue to be a fact of life while China continues its on current consumption growth trajectory.