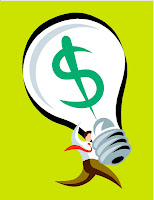 How much is that idea of yours really worth?

Yes, it's a question that we've addressed before, but one that we treated very generally. Metaphorically speaking, we could put you in the metropolitan area for your idea, but not necessarily within the ballpark!

Today, we're going to get a bit more precise! To do that, we're going to steal the math presented by The Shark Investor in considering how to profit from ideas. As we'll see, execution, or rather, the ability to implement an idea, is still the driving factor behind how much a given idea is worth, but now, we can put a more precise value on how much that idea is really worth:

If you want to invest in ideas, you must tell the good ones from the bad ones. You need to appraise the value of the ideas - and more important, the value of their future implementation. It's easy to think that an idea is great if you look only at the final outcome that it could produce some day. But there is very little use of such appraisal if you don't take in mind its implementation.

Implementation simply means how you can turn the idea into something real.

The good ideas are the ideas that can be implemented with reasonable resources and that you know how to implement. You may not need to know all the technical details of the idea's implementation, but you must know well who can take care for them and how much resources is it going to take.

So, let's say for example you have the idea to create a flying car. When considering the final outcome, it seems the idea is quite valuable. A flying car must interest a lot of people and probably will sell well. Of course, "probably" is not the best thing to rely on, but at this very early stage of brainstorming it is ok to rely on your guesswork. The idea of a flying car would be great if you could implement it. Maybe you are not an engineer and cannot invent it yourself. Do you know who could do it, how much is it going to cost and how much time is it going to take? Are you sure there is not someone else who is working on the same idea and could implement it faster than you?

But even this appraisal is way too simple. Because you need also to consider the probability to turn the business idea into action and to do it better and faster than the competition. So finally the very simplified equation looks like this:

Needless to say, we just can't pass that kind of math up! Just enter the data for the right hand side of the equation in the tool below, and our tool will find out how valuable that idea really is:

For our default scenario, we find that the value of an idea that has an even-money probability of being successfully executed and that could generate a million dollars in potential profits, but that also comes with a $500,000 price tag, really isn't even worth a single cent.

At least, given these parameter. The Shark Investor discusses some of the dynamics revealed by the math:

If you play with few numbers in the above equation, you will see that the probability factor plays much bigger role in estimating the idea value rather than the costs of implementation.

Let's get for example a software project that could bring you a million dollars in sales. If you hire a cheap team to develop it, the chances for successful idea implementation yet on the development stage are quite poor. This means that no matter how great the idea is, you will probably not see any profits. On the other hand, hiring a more experienced and talented team will cost you more, but will increase the chances of success and you may actually see the profits.

However, if you simply can not afford to hire the expensive team, then you have only the first option. Which makes the idea much less valuable. If exactly the same idea was owned by someone who could afford hiring a good team, it would have bigger value.

And so we once again confirm that in the world of ideas, execution is everything.